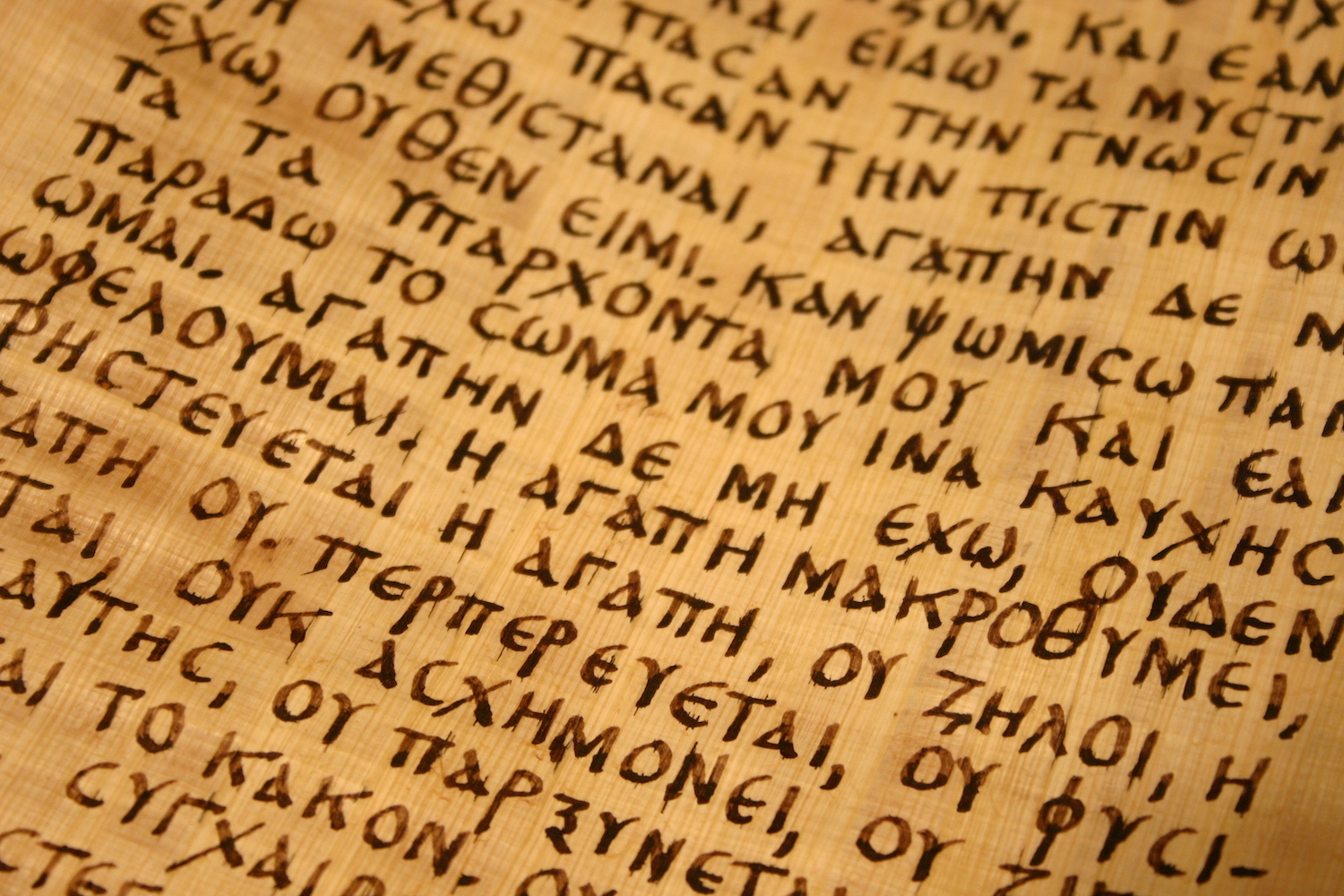 The Case of the Missing Verse
By Owen Nease

I still remember the look of the dried flowers. The smell of the storage room behind the baptistry. The racing of my heart and mind.

The reason I was in this room had to do with a sermon preached a couple of weeks beforehand. I was a college kid serving as an associate pastor in a rural church while studying for a Biblical Languages degree. The text for the sermon was Acts 8:26-40. The study prep was fun, the delivery went okay, and the couple of dozen congregants shook my hand politely as they left that evening.

What I hadn't predicted was the impact of pointing out in the sermon that Acts 8:37 might not show up in everyone's Bible; or if it did show up, your Bible might have a small note indicating the verse is not found in most early manuscripts.

It turns out this rural Baptist church was not big on textual criticism. (I should've guessed this based on one church member who weekly ridiculed academic degrees for pastors...but alas, collegiate hubris can cloud one's brain. And I had plenty of both -- hubris and cloudy brain.)

So, a few weeks later, there I was in the storage room being questioned by the pastor about why I didn't have a higher view of Scripture. I thought my love of the Bible, study of the Greek language, and interest in textual criticism meant I had a high view of Scripture. But the pastor was a bit upset, and it's worth noting that he made some fair points about how college-boys should be more careful when given the chance to pulpit supply on Sunday nights.

Not many years after that incident, I found myself in another storage-sized room, this time as a seminary student living in New Orleans and meticulously collating manuscripts from the first dozen or so centuries of Christianity. [1] In the process of studying the variants and nuances of these early manuscripts, my view of God's Word didn't diminish; in fact, my faith in -- and love of -- Scripture only increased. [2]

Fast forward to 2020, and my sermon text for January 26th was Matthew 23:13-39. Some (much? ... I can only hope!) of the hubris has been dulled by marriage, parenting, and pastoring -- three of the greatest sanctifiers in God's creation. Either way, there's no way I had time to cover 27 verses in the sermon, so it was just my luck that I had only 26 verses to worry about since Matthew 23:14 is missing (at least in my trusty Greek New Testament and the English Standard Version serving as my first-language crutch).

Needless to say, the "case of the missing verse" didn't make it into my sermon; but it's an important issue for pastors, teachers, and churches to consider. So, here goes a short version of how we can approach these missing verses.

4 Questions to Consider about Textual Criticism

1. What is textual criticism?

First things first, "criticism" isn't a bad word when studying the Bible. Criticism doesn't mean being critical (negative) about the Bible. More on that in future posts.

Textual criticism is the art and science of identifying the earliest wording for a series of documents when we no longer have access to the original document. (This hypothetical original document is often referred to as the autograph.) For the available manuscripts being compared, differences in wording or spelling are usually called variants.

In addition to identifying the earliest wording (with the goal of getting as close as possible to what the author originally wrote), textual critics also want to explain how and why secondary readings -- both deliberate and accidental -- originated. And, beyond this, textual critics are able to provide a window into Christian doctrine, church history, and language development.

Lastly, don't forget that textual criticism is a work in process. We are still finding manuscripts; scholars are still working on databases and theories; and translators are still determining which variants to include in the main text of their published Bibles.

2. How did we end up with this problem?

I'd encourage you to think of variants in the text as opportunities and gifts, not problems.

If you find yourself questioning the validity of Scripture because there are variations among the manuscripts, imagine the conspiracy theories that would fly if we had hundreds or even thousands of manuscripts and there was not a single difference among any! In that case, we might trust Scripture less, because no variations among a multitude of hand-copied documents would feel like a scam for sure. Textual criticism should provide more confidence than ever to read, study, trust, and obey God's Word.

We have variations in the text as a result of scribes (not machines) copying the documents by hand. As anyone who has copied a document by hand or keyboard knows, to err is human. A missed letter here; a skipped line there; and before you know it, the document has variants. In many (most?) cases, the variants weren't purposeful. Even the purposeful variants often aren't significant -- perhaps a copyist decided to correct a spelling mistake or insert an explanatory note (there is some evidence that notes made in the margins of a manuscript later found their way into the text). In rare cases -- though they do exist -- variants relate to theology. Even here, the differences won't overhaul the belief system of Christianity.

3. How do we determine which verses are included in the Bible and which aren't?

This is where the rubber meets the road; and frankly, where things can get a bit complicated.

When deciding among multiple options, scholars often analyze the variants based on external and internal factors.

External factors include: the date of the manuscript; the geographic location where the manuscript originated or was found; and the "stream" of manuscripts to which the document belongs. (I know this last point is confusing. Think of multiple tributaries branching off a source. Manuscripts are able to be grouped according to similar variants and other factors, such that they share a common source and characteristics.)

Internal factors include: length of the variant, comparison with parallel passages, grammar, style, and vocabulary. Internal analysis is admittedly more subjective and can be boiled down to the key question: "Which option best explains the origin of the other variants?"

Based on these factors, a base text is developed for the Greek New Testament (which is then used for translation); and the variants are placed in a set of footnotes that translators and scholars can use to debate and analyze the differences.

4. How does this impact my personal and church life?

The most obvious impact of textual criticism for most people has to do with the wording in various Bible translations. Certainly, the King James Version differs the most from other versions because of the KJV's use of a limited set of manuscripts.

A basic grasp of textual criticism can calm panic when people begin to ask questions about the footnotes in their Bible; and textual criticism -- done rightly -- can infuse some needed humility into our small groups and churches as we study God's Word together. In addition to all that, I think any Bible reader can benefit from following the steps below.

Seriously, thank God for the embarrassment of riches we have with so many available manuscripts displaying the development and incredible consistency of the New Testament. (This is true of the Old Testament as well...but my Hebrew skills disappeared long ago and I don't know much about Old Testament textual criticism. Plus, it's unbelievably freeing to admit you don't know much about most things.)

Part of thanking God includes reading with faith and worship and then obeying what you read. Study of the Bible and even study of the Bible's development should drive us to love God, love others, and make disciples of Jesus.

We often fear what we don't understand. Ask questions; explore resources; discuss the topic with people you respect.

If you want to take a next step in learning about textual criticism, one starting place is this article from The Center for the Study of New Testament Manuscripts. [3] And, if that whets your appetite, you can order the recent book on textual criticism mentioned in the CSNTM article. The book is called Myths and Mistakes in New Testament Textual Criticism. [4]

3. Practice asking yourself key questions that are part of textual criticism

When your Bible has a footnote indicating a particular verse isn't found in the earliest manuscripts, ask:

A. Why might a scribe have added or edited this wording?
B. Is there a parallel passage (either in the Old Testament or in another New Testament book) that might have influenced the wording?
C. What is the impact -- if any -- of this variant on my understanding of the Scripture I'm studying?
D. What additional questions or lines of research does this situation create for me to explore?

4. Contribute to your church's flower fund

At least this way, the next time someone ends up in the flower storage room because of a missing verse, the room will look and smell nice.

OWEN NEASE is an NOBTS alum and the pastor of Emmaus Baptist Church in Oklahoma City, OK. This post originally appeared on OwenNease.com.

[1] Collating is the process of comparing a manuscript document against a "base text" and looking for any ways in which the manuscript being studied differs from the base text. These differences are recorded so scholars can track and compare changes.

New Orleans Baptist Theological Seminary has a wonderful Bible museum and study center as part of the H. Milton Haggard Center for New Testament Studies (https://www.nobts.edu/cntts/default.html). I'd encourage you to look at their website. NOBTS is not responsible, though, for anything dumb or incorrect I might write on this website.

[2] I realize not everyone's story ends this way, and I am certainly not speaking poorly or despairingly of those whose academic study led them to adjust or abandon their faith. I simply want to counter the notion that academic study will lead one away from Christian faith.

[4] One contributor for this book is Matthew Solomon, an NOBTS alum.