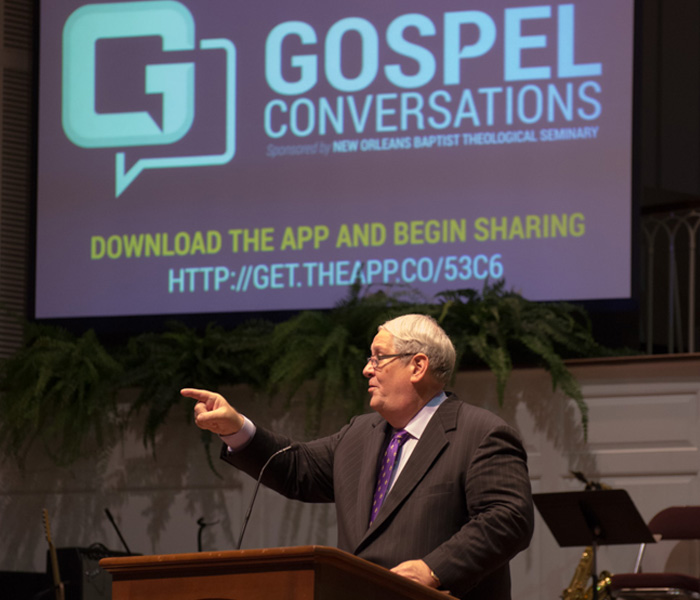 NOBTS year-long centennial to have evangelistic focus
By Marilyn Stewart

Activities began with the annual Founders Day chapel service, as NOBTS President Chuck Kelley pointed past the seminary's 1917 founding to the true "seed" from which the seminary sprang -- the Acts 1:8 commission by Jesus to take the Gospel to all nations.

Kelley asked Southern Baptists to join with NOBTS in reaching 100,000 Gospel conversations during the centennial year in honor of that commission.

"We were created to be a lighthouse as well as a schoolhouse," Kelley said. "We're asking all Southern Baptists, not just our seminary family, to help us tell 100,000 people about Jesus."

NOBTS has created a smartphone app to help track the 100,000 Gospel conversations. It offers evangelism helps, a reporting tool and follow-up assistance to help connect individuals with a local church. The app can be downloaded here.

The seminary's centennial goals include $50 million for scholarship endowments, campus renovation and expenditures and 100 mission trips during the year involving the NOBTS family, alumni and friends.

Founded as the Baptist Bible Institute by vote of messengers at the 1917 Southern Baptist Convention -- the only seminary to be created by direct action of the SBC -- the seminary was intended as a training school for missionaries. Classes began in October 1918.

A century ago, New Orleans had few Baptists and less than 10 Baptist churches. Kelley called it a "radical" decision since denominational entities typically are placed in cities with a strong base of support.

God has been faithful and the seminary has been a "lighthouse" to the city, Kelley said. He noted that Baptists today make up the second largest religious group in the city, with the New Orleans Baptist Association encompassing more than 125 churches.

"We were put here to bear witness to Jesus," Kelley said. "That's what the centennial is about. It's about remembering that being a witness for Christ is not convenient … and of our own accord we are not likely to do, but with the Holy Spirit enabling us, we are able."

David Hankins, Louisiana Baptist Convention executive director, thanked the seminary for its partnership with and contributions to Louisiana Baptists. Hankins noted the faculty and students who serve as pastors and church staff members; the NOBTS ministry in the Louisiana State Penitentiary at Angola; and the seminary's support of a church planting initiative that has netted 50 new Louisiana congregations since 2010.

"We're thankful for the partnership we have," Hankins said. "Only heaven knows the eternal good that has come from what has gone from this institution."

Jim Futral, Mississippi Baptist Convention executive director, expressed gratitude for the seminary's influence on his life, adding, "I am the least of all the saints, but I am the most grateful."

Kelly reminded the evening audience that the Gospel began "on the streets of Jerusalem and by the shores of Galilee" to reach them where they were, representing an unbroken chain of Gospel conversations.

"Don't break the chain," Kelley urged. "There are people who will not hear about Jesus if we are not faithful in talking about Jesus."

Junior Hill, 81, speaking on the parable of the seed, the soil and the sower in Luke 8:5-15, noted a fourth consideration stemming from the passage -- Satan's strategy.

"The battleground we're facing today is that the devil is assaulting those of us who have the seed in our hand to take it away so that the world won't be able to hear it," Hill said. "It is happening on every corner, and we better be aware of the subtleties of Satan lest he take the seed out of our hand."

Hill said Satan thwarts believers' efforts through intimidation by causing believers to ignore God's prompting to share; spending time on evaluation of an opportunity to share rather than proclamation; and becoming weary in well-doing.

Urging the NOBTS community not to give up or give in to weariness, Hill reminded that one day they will hear God say, "Well-done, thou good and faithful servant."

"Oh, my dear brothers and sisters, we have a Gospel to share," Hill concluded. "May God give us grace that we be faithful to share."