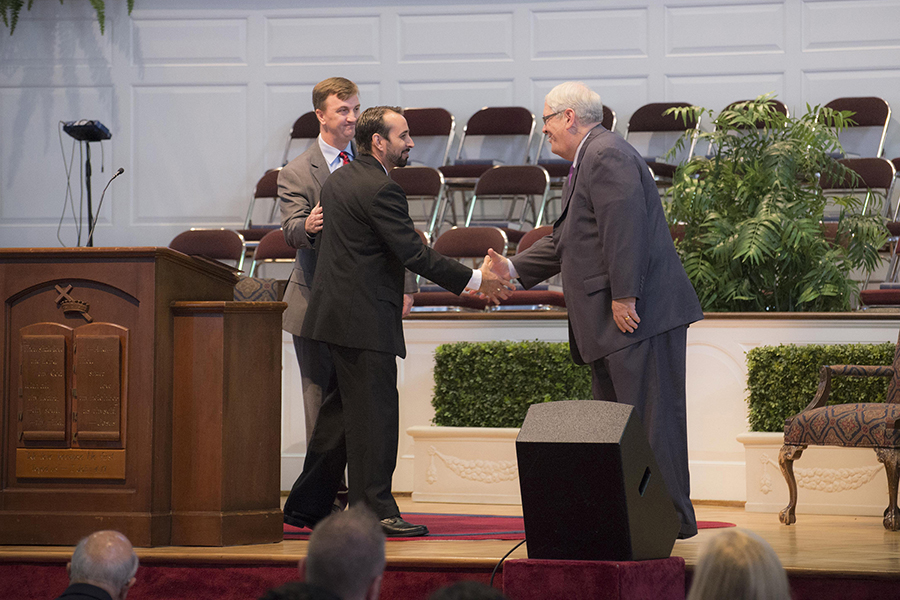 Kelley at convocation: Servant leadership 'costly, yet necessary'
By Marilyn Stewart
NEW ORLEANS -- Chuck Kelley, New Orleans Baptist Theological Seminary president, marked the start of the academic year by referencing a moment every teacher knows -- when a student asks, "Is this going to be on the test?"

Kelley pointed to Mark 10:32-45 to say Jesus had a similar experience as He traveled toward Jerusalem, telling His disciples He would face arrest, flogging and death. Jesus explained that all of His ministry and the reason for the incarnation was about to reach fruition, Kelley noted.

But then James and John ask a question, Kelley said.

"There was a complete disengagement between what Jesus was saying as compared to what their expectations were," Kelley said of the disciples' request for a place of honor in the coming Kingdom. "Jesus answered them, 'You don't even know what you're asking.'"

Kelley pointed to Jesus' "remarkable statement" in verse 45 contrasting Gentile rulers and those in God's Kingdom. "One wields power and authority; the other engages in service," Kelley said.

If God's Son came to serve rather than being ministered to, Kelley said, then believers must commit to serving others. He pointed to the year's emphasis of servant leadership, one of NOBTS' core values, and challenged the convocation audience to live lives of service.

"Servant leadership is necessary," Kelley said. "It is costly, very costly. And it is ultimately the whole point of the Kingdom of God."

Faculty members marking anniversaries NOBTS were recognized by Kelley during the convocation.

The first faculty member to be appointed to the new position of distinguished research professor also was announced.