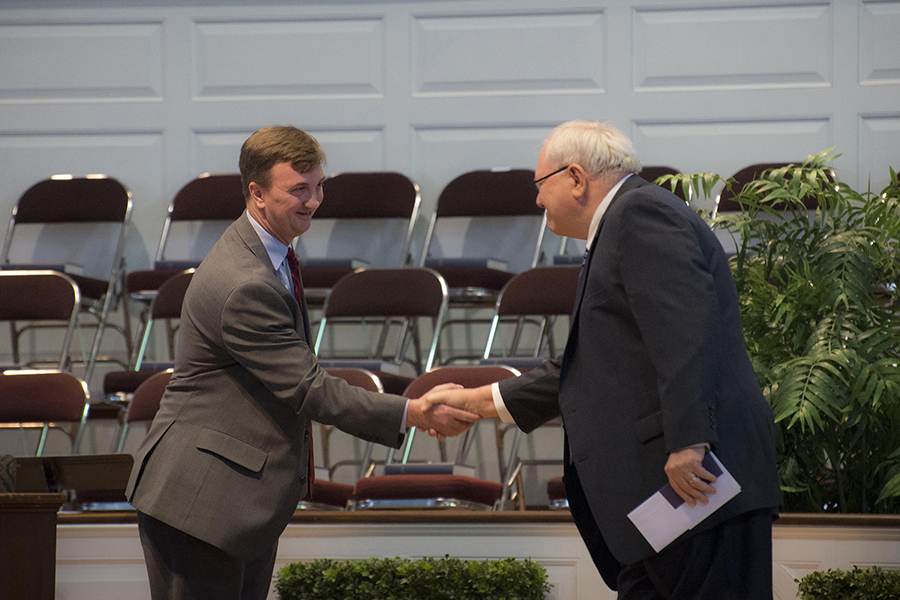 NEW ORLEANS -- Norris Grubbs, New Orleans Baptist Theological Seminary's new provost, has stepped into a position is already familiar to him in many ways.

"We have godly men and women serving God here who are experts in their field," Grubbs said, reflecting on leading his first convocation Sept. 5. "I want to do my very best to help them serve God as best they can. That would be success for me."

Grubbs, 45, who assumed his new role Aug. 1, has seen the seminary from the vantage point of a master of divinity student; joining the faculty and going through Hurricane Katrina; and associate provost overseeing the extension centers and enrollment management.

"I taught him when he was working toward his M.Div., we were on faculty together in Leavell College, and I was his dean for over 15 years," Strong said. "Now he is my provost and I couldn't be happier."

Grubbs joined the Leavell College faculty in 2000 as an instructor in New Testament and Greek while completing his doctor of philosophy degree at NOBTS. He was elected associate professor of New Testament and Greek after completing his Ph.D. In addition to his M.Div. from NOBTS, he holds a bachelor of arts degree from Union University in Jackson, Tenn.

The great-grandson of a circuit riding preacher and son of a Baptist layman and businessman, Grubbs said God's call on his life began at an early age while growing up in Pontotoc, Miss. A plaque he made as a 7-year-old displayed his dreams for his future, that of being a "pro football player" and a "preacher."

Hired first as a fulltime contract teacher, Grubbs served one year before the seminary elected him to faculty as an instructor. The move into the classroom was a turn he didn't expect but one he came to embrace.

"I realized God is the one who calls and He can direct any way He wants. I'm going to say yes," Grubbs said. "I see that He's reshaping how He wants to use me again and I want to do my best to serve Him in this role."

Mike Edens, NOBTS graduate dean, said the seminary has had a long line of outstanding leaders and noted that Grubbs "is in that line." Grubbs is "a man of God, a brilliant scholar in his own discipline and a personable statesman for the Gospel," Edens said.

As the seminary celebrates its 100th anniversary during the 2017-2018 academic year, Grubbs will help lead the seminary into the next century and to new goals. Strong said Grubbs has the skills to handle the job.

"Dr. Grubbs has an incredible mind that is able to organize and analyze," Strong said. "He has the ability to look at all that is taking place, ask the appropriate questions and lead to necessary conclusions."

Edens said Grubbs thinks about the problems that face churches today and how best to equip leaders to fulfill the Great Commission more effectively.

Grubbs coauthored "Word Studies Made Simple: How to Study the Bible in the Original Languages" (2013) with Francis Kimmitt, authored numerous articles for the Baker Bible Dictionary, collated several manuscripts for the International Greek New Testament Project, and serves as a research fellow for the Research Institute of the Ethics & Religious Liberty Commission.

Grubbs has served as pastor and interim pastor at numerous churches. He and wife Kim are the parents of three daughters, Katie, 16, Mollie, 14, and Cameron, 9.

For Strong, Grubbs is, first and foremost, a friend.

"Perhaps, above all, I am most thankful for Norris as a fellow pilgrim on this journey with Christ," Strong said. "I feel closer to God as a result of my friendship with him. I am thankful that he is my friend, my colleague and now my provost.