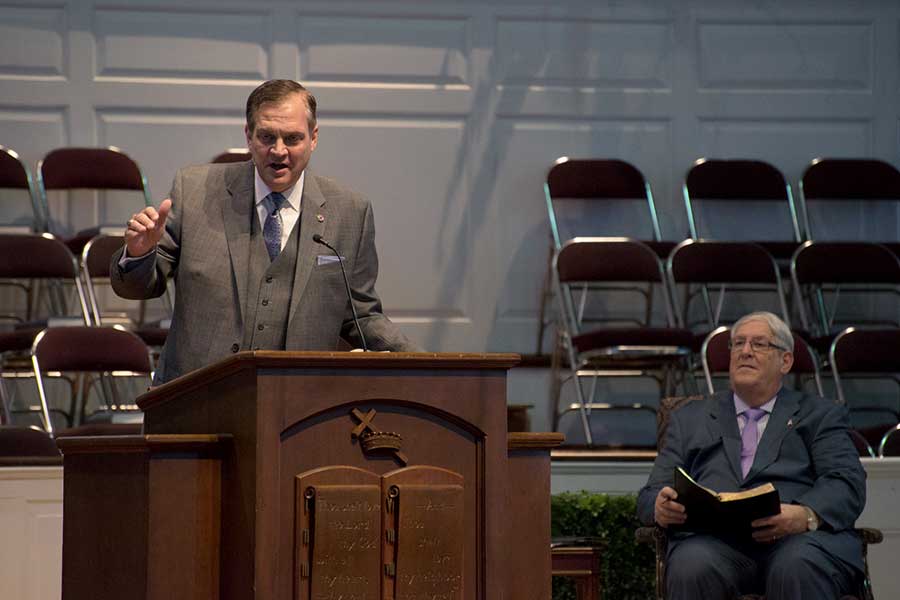 “In 1917, there was established a school in New Orleans, Louisiana, a school by Baptists, intentionally by Baptists, strategically and missiologically established by Baptists and thus the 100th anniversary of New Orleans Baptist Theological Seminary,” Mohler said. “What a joy and honor it is for me to be here in this place this year as you are celebrating.”

Mohler called the establishment of a seminary in New Orleans a “bold and ambitious move” that helped with the Southern Baptist Convention’s expansion to the West.

Turning his attention to the text of Acts 19:11-20, Mohler shared how the word of the Lord “prevailed mightily” in Ephesus. Through God’s power, Paul had been performing miracles in the city. People were being healed by simply touching garments Paul had touched. Evil spirits were being cast out.

A group of itinerate Jewish exorcists, the seven sons of Sceva, saw the miracles and attempted to cast out an evil spirit by evoking the “name of Jesus, whom Paul preaches.” The spirit answered the exorcists by acknowledging that it knew of Jesus and Paul. However, the spirit did not know the sons of Sceva. It rejected their authority and gave the exorcists a severe beating.

As news of the event spread, the gospel spread as well. The Bible states that many Jews and Greeks came to faith in Christ and “the word of the Lord prevailed mightily.”

Mohler advised vigilant attention to detail and context when reading passages like Acts. 19.

“We understand that in the flow of biblical history, in that apostolic age, God was verifying the message of the Apostles through certain signs and wonders that were normative then, that are not normative now,” Mohler said.

Even though ministers today should not expect the same type of extraordinary signs, Mohler cautioned against viewing the task for the modern church as less extraordinary. Today, ministers of the gospel are tasked with preaching God’s Word. God uses this preaching of the Word to do amazing things, Mohler said.

“Your responsibility is to get the Word from your mouth to their ears and you can go no further,” Mohler said. “The Holy Spirit will take the Word from their ears to their hearts and do what you can’t do. We get to preach the Word of God and see the miraculous happen.”

In the text, the evil spirit knew about Paul, but did not know the sons of Sceva. Mohler suggested that one goal of the Christian disciple is to be known by the demons. Those believers who are authentic in their commitment to Christ will cause the demons to shutter, he said.

“May we all do everything possible in order to make certain that the demons know us by name,” Mohler said.

“Who in their right mind would put an evangelical theological seminary here?” Mohler said. “Only people who are absolutely confident that the Word of the Lord will increase and prevail mightily.”

According to Mohler, every city bears some resemblance to Ephesus and every city needs witnesses who will boldly preach the Word of God.