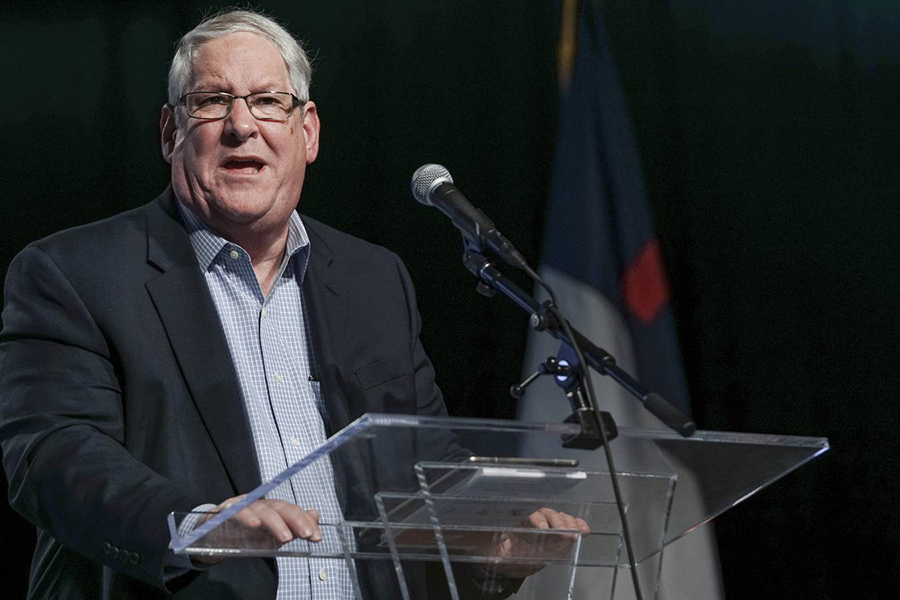 Kelley: NOBTS centennial to focus on Gospel and missions
By Marilyn Stewart

Centennial events launch Oct. 3 with special activities and emphases on campus and at extension centers continuing throughout the year.

But the NOBTS 100th birthday celebration must not be like any other celebration, Kelley said, “because of the present state of the Southern Baptist Convention.”

Kelley referenced findings by the NOBTS Leavell Center for Church Growth and Evangelism on the continued decline in baptisms in Southern Baptist churches. Presenting a chart of the findings to messengers, Kelley called the statistics “stunning.”

Kelley said church plants are “absolutely essential” but the drop in baptisms demands Southern Baptists’ attention, with the NOBTS centennial being no exception.

“We need to celebrate in a way that will strengthen our seminary and our churches,” Kelley said, issuing a challenge to the convention to join with the NOBTS family in a centennial initiative goal of 100,000 Gospel conversations and 100 mission efforts.

The call for action is in keeping with the charge given the seminary at its founding, Kelley said.

Kelley recounted the seminary’s history that began with a resolution at the 1845 convention in Augusta, Ga., calling on the Board of Domestic Missions, now the North American Mission Board, “to direct its effective attention to aid the present effort, to establish the Baptist cause in the city of New Orleans.”

Established by vote of the convention in 1917, NOBTS was directed to have as its “primary purpose the object of missionary propaganda,” Kelley recounted.

Through the NOBTS Caskey Center for Church Excellence, student scholarship recipients share the Gospel weekly, Kelley noted. In the three years since its founding, the Caskey Center has reported 17,973 Gospel conversations, with 6,987 asking for a response and 1,766 coming to faith in Christ.

Kelley echoed an observation made by NOBTS Caskey Center director Mark Tolbert that believers “drift” away from evangelism and that Gospel conversations must be intentional.

To remedy the drift from evangelism, Kelley suggested a “Monday morning prayer” asking God for the opportunity to share the Gospel during the week and courage to ask for a response. A special app for reporting Gospel conversations and mission efforts is available at the Caskey website.

Continuing through Oct. 2, 2018, the centennial celebration will center around three focal points: celebrating the past, embracing the present and casting a vision for the future. Details are available at the seminary’s anniversary page.

In a heartfelt aside, Kelley recounted a “stain” on NOBTS’ history in which the seminary established a separate school to train African American students early in the 20th century. Today, that “dynamic has changed,” Kelley reported as steps toward a better relationship have been laid. Kelley pleaded with messengers to stand united against racism at every front.

Kelley concluded with, “May God use the occasion of our 100th anniversary to prepare NOBTS for the future and to prepare the SBC for a mighty movement of God.”