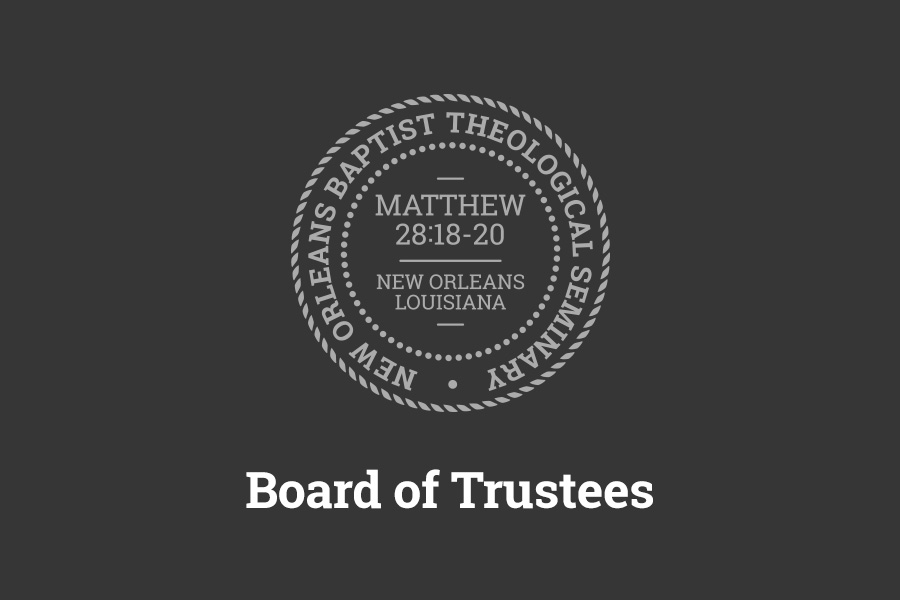 The trustees approved a $24.3 million budget. Several significant curriculum adjustments were approved including the renaming of the Division of Christian Education to Division of the Discipleship and Ministry Leadership and name changes for the seminary’s counseling degrees.

NOBTS President Chuck Kelley said increased assessment requirements from the seminary’s two main accrediting bodies -- the Association of Theological Schools in the United States and Canada and the Southern Association of Colleges and Schools Commission on Colleges -- precipitated the development of the new leadership position.

Kelley called Lemke a natural choice due to his long tenure as provost and his involvement in the past two 10-year reaccreditation cycles. Lemke, he said, will be charged with creating a “culture of assessment” at NOBTS.

Trustees approved Norris Grubbs as the seminary’s new provost, to assume the new role in August. He currently is professor of New Testament and Greek and associate provost for extension centers and enrollment management.

Grubbs joined the Leavell College faculty in 2000 as an instructor in New Testament and Greek while completing his doctor of philosophy degree at NOBTS. He was elected associate professor of New Testament and Greek at Leavell College upon completion of his Ph.D. Grubbs holds a master of divinity degree from NOBTS and a bachelor of arts degree from Union University in Jackson, Tenn.

Trustees also approved Jonathan Key as vice president of institutional advancement -- the office which oversees fundraising efforts, alumni relations, communication and marketing. Key replaces Randy Driggers who left the role due to ongoing health issues. Key has led the institutional advancement group on an interim basis since September 2016 while Driggers was away on medical leave.

Key, assistant professor of Christian ministry in Leavell College, previously served as the assistant to the president and director of student enlistment at NOBTS. He holds doctor of ministry and master of divinity degrees from NOBTS. In 2012, the year Key graduated with the M.Div., he received the Broadman and Holman Seminarian Award.

Hughes is assistant professor of expository preaching, dean of the chapel and director of the Adrian Rogers Center for Expository Preaching at NOBTS. Hughes came to NOBTS last year from First Baptist Church in West Albuquerque, N.M., where he was senior pastor. An Arkansas native, Hughes holds doctor of philosophy and master of divinity degrees from Southwestern Baptist Theological Seminary and a bachelor of arts degree from the University of Arkansas at Little Rock.

Killion was elected as associate professor of voice and conducting. Earlier this semester, Killion defended his dissertation in the doctor of musical arts program at the University of Oklahoma and will graduate in May. He holds a master of church music degree from Southwestern Seminary and spent nearly 20 years in music ministry at churches in California, Oklahoma and Texas. Before coming to NOBTS, Killion taught voice at California Baptist University.

Putman also was granted tenure along with Peter Kendrick, professor of theology and culture, regional associate dean for Alabama and Georgia, and director of the North Georgia Hub.

Kelley also announced that Jody Dean, assistant professor for Christian education, has been appointed as senior regional associate dean for Louisiana and Mississippi.

Trustees approved a name change for the Division of Christian Education (CE). The new name, Division of Discipleship and Ministry Leadership, aims to better reflect new nomenclature of local church ministry positions. However, the name of the division’s most popular degree, the master of arts in Christian education, will not be affected by the division name change.

The board approved the following curriculum plans for counseling degrees to comply with Council for Accreditation of Counseling and Related Educational Programs (CACREP) accreditation requirements:

-- master of divinity with specialization in marriage and family counseling

-- doctor of philosophy in counselor education and supervision

In other academic moves, trustees approved:

-- reinstatement of the doctor of philosophy major in church history

-- the addition of an undergraduate program at the extension center in Huntsville, Ala., for students transferring from the on-site but now closed Legacy Christian University.