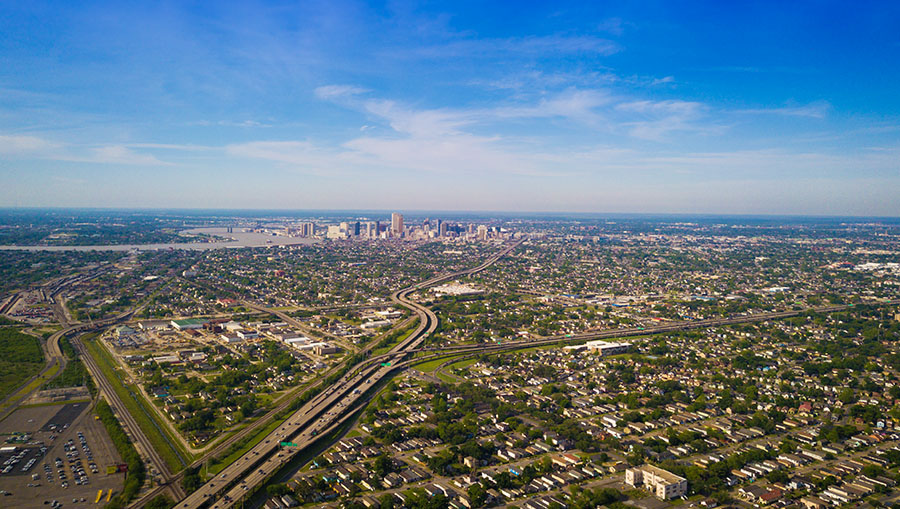 “It does not work ... if you do not work it,” said Nix, who serves as professor of evangelism and evangelistic preaching at NOBTS. “But if you work it with a smile on your face, the love of Christ in your heart, and the Good News of the Gospel on your lips shared with kindness and conviction, you will be amazed at how many people will listen to you and respond to the message of the Gospel.”

Nix planned the servanthood evangelism project for April 26. Called “100 houses - 100 minutes,” the goal was to visit 100 houses in Gentilly with teams of three or four offering smoke alarm batteries, a 100th-anniversary pen from NOBTS, and a Gospel conversation to all who would listen. Nix believed it was possible to do all of this in one and a half hours if enough students and faculty members participated.

While most of the seminary’s centennial celebration is taking place on campus and at NOBTS extension centers, Nix wanted to celebrate the anniversary in a way that harkened back to the purpose the school was planted in New Orleans. “This school was founded as a training ground for getting the Gospel out to the nations so I wanted us to be true to our roots and get outside the gates of the seminary during this special season with the life-changing message of Jesus to our community,” Nix said.

In Nix’s faculty carpool on the way to campus April 26, Dr. Jeff Griffin, dean of libraries at NOBTS, prayed that five people would place their faith in Christ through the outreach efforts later that afternoon. When the event rolled around, 17 volunteers (nine professors and eight students) went in the neighborhoods near the seminary campus to share their faith. With a few more teams the goal of visiting 100 houses would have been completed, however, the teams were able to visit 81 houses and engaged in 38 Gospel conversations that day.

During this initial afternoon effort, four people made decisions for Christ. However, when Dr. Ken Taylor and David Sneed of Gentilly Baptist Church began the follow-up process April 28, they encountered Zachary at one of the houses on their list. After talking with Dr. Adam Hughes and Ben Trull on April 26, Zachary was eager for a follow-up Gospel conversation.

Sneed began by sharing his testimony and then presented the Gospel to Zachary. Zachary would become the fifth individual reached, in part, by the original outreach effort – the very number of people Griffin prayed for the morning of April 26.

“As David shared, Zachary was intent and he said, ‘I need what you are sharing,’” said Taylor, professor of urban missions at NOBTS and pastor of Gentilly Baptist Church. “Zachary started shedding tears even before he prayed. David led him in the sinner’s prayer and he seemed overjoyed.”

Though excited about the results from April 26 and 28, Nix wanted NOBTS teams to visit at least 100 houses before considering the project complete. Nix scheduled two additional outreach efforts on May 3 and 10 in order to meet the original goal.

On May 3, a small group of volunteers visited 10 houses and had five Gospel conversions. Through their efforts that day, one individual accepted Christ. The following week, group of nine students and professors visited 15 more house to bring the total to 106 houses.

Nix was overwhelmed by the high percentage of Gospel conversations and the number of people who trusted Christ. Reaching 100 houses took longer than 100 minutes, but Nix attributed the increased time to the fact that half of the visits resulted in a Gospel conversation. The visits take much longer when people are open to the Gospel, Nix said.

“We had 53 Gospel Conversations – exactly half of the contacts which is a very high percentage,” Nix said. “We discovered at least 16 prospects but the most important stat of all: we saw six precious souls give their hearts to Christ!”