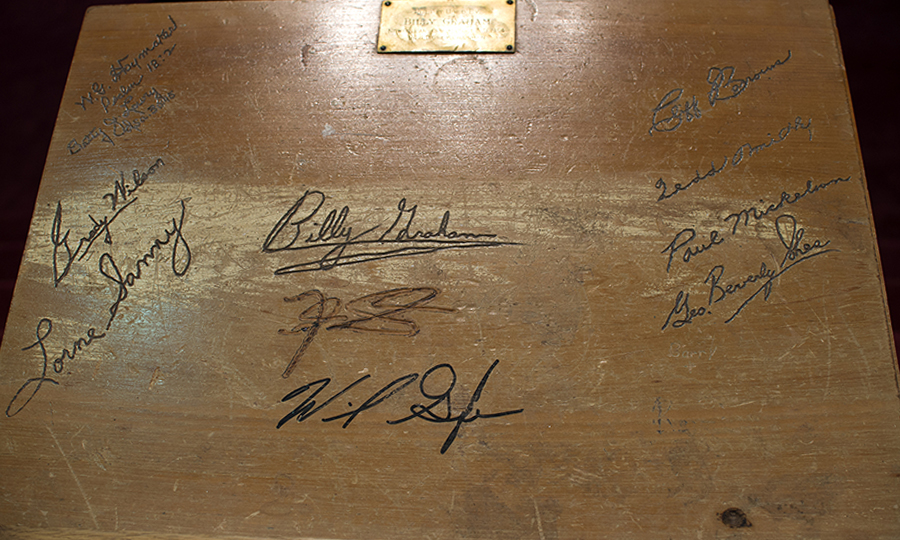 The faded pulpit at the front of New Orleans Baptist Theological Seminary's Leavell Chapel during the first week of March seemed out of place. Out of place unless one saw Billy Graham's signature scrawled on its top.

The time-worn, battered pulpit is the one used by Graham during his 1954 New Orleans crusade. From Oct. 3-31, 1954, Graham preached the Gospel to crowds at Pelican Stadium and Tulane Stadium in the Crescent City.

According to The Times-Picayune, 4,411 people committed their lives to Christ during the crusade. Leaders at NOBTS placed the pulpit in Leavell Chapel for campus revival week and preview weekend to honor the Gospel-focused legacy of Graham, who passed away Feb. 21.

"Billy Graham proclaimed the Gospel and extended an invitation to more people than any other person in the history of the church. He did this from behind pulpits all over this country and in most of the nations of the world," New Orleans Baptist Theological Seminary President Chuck Kelley said. "We honor his legacy of powerful, fruitful evangelistic preaching by using [it] in our chapel this week."

While the historic stadiums where Graham preached in 1954 are long gone, the pulpit remains. J.D. Grey, long-time pastor of First Baptist Church in New Orleans, asked Graham and his ministry team to sign the pulpit during the successful crusade and he kept it. The names -- including Graham, George Beverly Shea, Cliff Barrows, and others -- were etched into the surface and preserved with a wood-burning tool.

When NOBTS built the J.D. and Lillian Grey Mission Apartments and Library building on campus, Grey donated the pulpit for use in the Grey Library.

For years, the building has served as a temporary residence for countless International Mission Board missionaries during stateside assignment.

The pulpit gained some of its scuffs and marks during another famous event in New Orleans in August 2005 -- Hurricane Katrina. When the levee failures in the aftermath of Katrina sent flood waters spilling onto the NOBTS campus, the pulpit was not spared.

"One can't help but notice the visible effects of time and a battering by the floodwaters of Hurricane Katrina on the pulpit," Kelley said.

"Nothing stops the progress of the Gospel, not even the death of Billy Graham," he noted. "Simple, distinctive, and battered, the pulpit is silent, yet still it speaks, an echo of the greatest evangelist who ever lived."

Campus security officials, including Barry Busby, chief of campus police with Hurricane Katrina hit, rescued the pulpit from Grey Library as waters rose. Busby noted that the pulpit was floating upside down in two feet of water when he found it.

When Graham returned to New Orleans with his son Franklin in 2006 in the aftermath of Hurricane Katrina, the pulpit was used again during a special service for area pastors held at First Baptist Church in New Orleans. Graham also spoke during a two-night crusade at the New Orleans Arena during that trip. These were some of Graham's last public sermons. Franklin signed the pulpit during the 2006 event.

The first person to preach behind the Billy Graham pulpit in Leavell Chapel March 1 was Preston Nix, professor of evangelism and evangelistic preaching at NOBTS. Nix has a special connection with Graham which began in Katrina's aftermath.

A newly elected NOBTS faculty member in August 2005, Nix had just moved to the city and much of his personal library sat in boxes in his on-campus garage when the campus flooded. Nix lost everything -- his home, his books and 30-plus years of sermon notes.

Nix's sister, Amber Pendleton, wanted to do something special for her brother during his time of loss. Knowing her brother's high regard for the work of Graham, Pendleton contacted the Billy Graham Evangelistic Association seeking an autographed copy of one of the evangelist's books.

A few months after Katrina, the organization sent an autographed copy of Graham's classic work "How to be Born Again." And despite Graham's continuing health problems, he and his staff chose a selection of books from his personal library to send to Nix.

"I restarted my library with a signed copy of 'How to Be Born Again' and some of Billy's own books," Nix said at the time. "I'm so grateful."