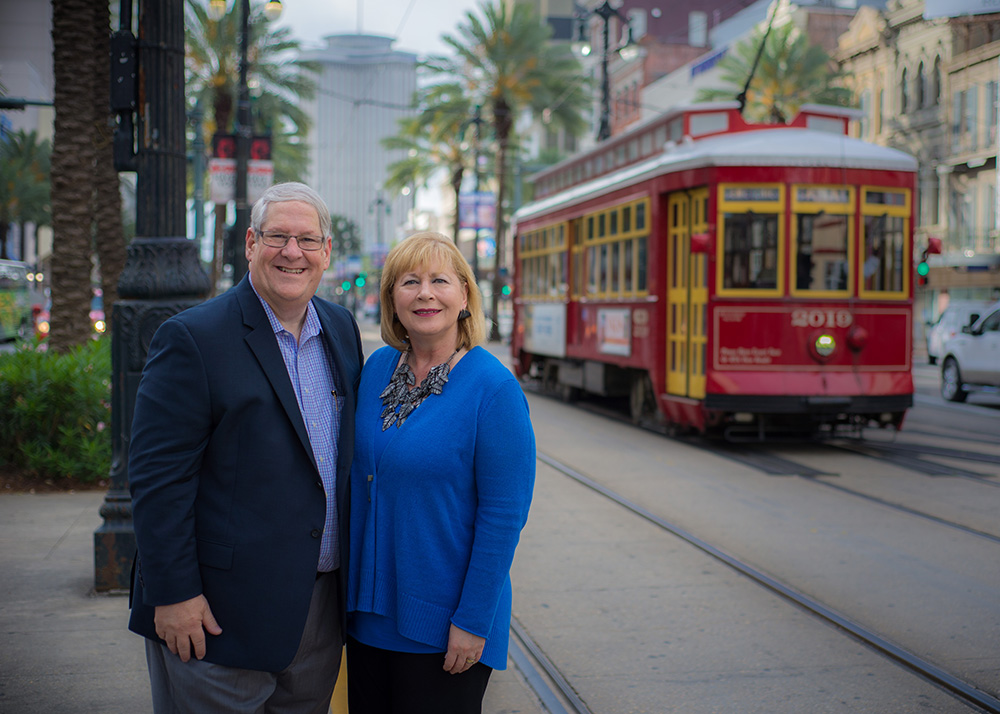 “This is the biggest decision of my life in a lot of ways,” Kelley said in an interview. “I have been a part of almost half of the 100-year existence of NOBTS, it is very much the fabric of my whole life, and it has been a joyful, wondrous journey.”

“This is a happy decision for us,” Kelley said. “We have served the seminary in a variety of ways and are thrilled to do so now in a completely different way.”

The public announcement came during Kelley’s Founders’ Day presentation called “A Walk through the Presidents.” In the presentation, Kelley noted the highlights of the seven other presidents who have served since the seminary launched 100 years ago. He concluded with the story of his presidency and the announcement about his future.

After much prayer and several years of planning, Kelley said the conclusion of the centennial celebration offered a great opportunity to announce the transition. Kelley expressed his desire to see new leadership in place that will set the course for the next era of ministry.

“Why now?” Kelley asked rhetorically. “As I look back at how intertwined my life has been with nearly half of the first century of the school, it seems appropriate to let the next leader start fresh with the second century of NOBTS.”

Kelley notified trustee chairman Frank Cox, senior pastor of North Metro Baptist Church in Lawrenceville, Ga., of his retirement plans in a written statement on Sept. 24. Shortly before the chapel service, Kelley announced his plans to the executive committee of the NOBTS trustee board who were on campus for their regular fall meeting.

Cox praised Kelley’s leadership following Hurricane Katrina, when the school faced its greatest challenge. The board has great appreciation for Kelley’s accomplishments at NOBTS, his commitment to evangelism, and for the many contributions he and his wife, Rhonda, made to the SBC as a whole, Cox said.

In his retirement years, which will be spent primarily in Fairhope, Ala., Kelley plans to begin a renewed focus on research into the SBC’s evangelism issues. Kelley, who has studied evangelism practices and baptism statistics in the SBC since 1982, believes that the decline in baptisms represents a profound crisis for Southern Baptists. He intends to write and speak on evangelism and discipleship with a frequency and fervor that simply was not possible while leading the seminary.

“We know that he will be an ambassador for NOBTS and contributing to Southern Baptist life through his research and writing on evangelism,” Cox said.

The trustees will enact the seminary’s presidential search protocol during their fall meeting Oct. 3. The seminary bylaws call for Cox to appoint a committee with 11 voting members—including the board chairman, the immediate past chairman, one faculty member, one student, and seven other board members.

“By making the announcement now the trustees have a reasonable chance to have someone in place by the start of the next academic year,” Kelley said.

The Kelley Presidency
The board of trustees unanimously elected Kelley as the eighth NOBTS president in 1996 following a 20-year tenure by Landrum P. Leavell II. A professor of evangelism at NOBTS since August 1983, Kelley assumed the office of president March 1, 1996. Since his election, Kelley has led NOBTS through a rapidly changing academic and ecclesiastic landscape and rebuilt the campus twice—once due to extensive Formosan termite damage and a second time in the aftermath of Hurricane Katrina. His tenure will be remembered both for innovation and for faithfulness to God’s call in the face of stiff challenges.

Kelley set the tone of his presidency in 1997 by working with the faculty to identify the core competencies graduates needed to serve in a local church. They identified seven and restructured the entire curriculum around the needs of the local church ministry.

Another important local church initiative serves as a bookend for his tenure. In 2014, the seminary launched the Caskey Center for Church Excellence with the help of a multi-million-dollar anonymous gift. The center offers full scholarships and other assistance for bi-vocational and small church ministers. The program which emphasizes personal evangelism has resulted in 26,359 Gospel conversations and 2,887 new believers.

Kelley received high marks for his steady hand of leadership in the immediate aftermath of Katrina. Part of the reason for the swift recovery was the seminary’s combined use of educational technology and extension centers. Online technology and new instruction methods allowed professors to keep teaching and students to keep learning just weeks after the storm. Though enrollment declined in the initial aftermath of Hurricane Katrina, it rebounded to reach an all-time high enrollment of 3,955 students in 2015.

Distance learning has been another hallmark of the Kelley presidency. Through the implementation of extension centers, Internet and hybrid courses and non-residential doctoral studies, Kelley has helped the school offer God-called men and women the opportunity to pursue theological education that would otherwise have been unattainable. A new emphasis on mentoring is preparing the next generation of church leaders with real-world leadership opportunities in the local church. Non-traditional students have become the NOBTS tradition.

Early in his tenure, Kelley was presented with a radical idea -- to offer training at the Louisiana State Penitentiary in Angola, La. Sensing God’s call, Kelley’s team launched an undergraduate program at Angola. The effort led to a church-planting movement at the prison, with many coming to Christ resulting in a transformation of the prison’s culture. The idea spread quickly as NOBTS started similar programs at men’s prisons in three other states and at Louisiana’s prison for women. Other seminaries have followed the NOBTS lead by starting prison programs in their states.

More recently, NOBTS weathered the challenge of a national economic downturn and a sea-change in theological education. Having overcome many post-Katrina setbacks, the seminary adopted new operational and funding strategies better suited to today’s economic realities and the current generation of students. For Kelley the key focus is to provide some form of theological education for anyone God calls, even if they can’t move to a residential campus.

NOBTS will devote the Spring edition of the Vision magazine to the many contributions Kelley and his wife, Rhonda, have made at the seminary and throughout the ministries of the Southern Baptist Convention.