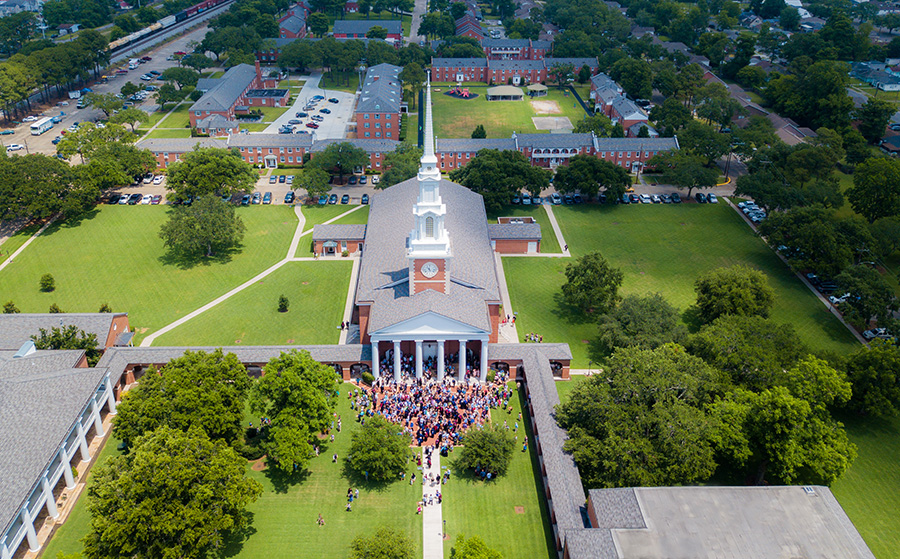 Kelley to NOBTS grads: 'Jesus changes everything'
By Marilyn Stewart

Chuck Kelley, NOBTS president, reminded the chapel audience that while a media frenzy that morning surrounded Prince Harry and his new bride Meghan Markle, no reporters waited outside to talk to them.

"So, why does this day matter?" Kelley asked the crowd. "The occasion we are here for today is far, far more significant than that gathering that has the eyes of the whole world."

Every graduate is important, Kelley explained, but the ministries and positions of service each would soon occupy did not depend on them.

"Your life matters," Kelley said. "But, it's not about you. It's about Jesus. He holds the key."

Kelley explained that he carries in his pocket a key once used to unlock cell doors at the Louisiana State Penitentiary in Angola, La. Worn past its usefulness, the key now is "retired," Kelley said.

"I carry it with me always as a reminder that Jesus changes everything," Kelley said.

Once known as the "bloodiest prison in America," the Angola prison today is home to more than 325 graduates of the NOBTS baccalaureate program, with inmates leading 25 cell block congregations and baptizing about 100 per year using a child's wading pool.

The change to the maximum security prison started 22 years ago when then-warden Burl Cain asked if the seminary would begin a theological training program for inmates, Kelley noted. Of the prison's 5,000 inmates, many are serving life terms.

Kelley related that at the first Angola graduation 20 years ago, Cain told him that each of the graduates "had killed at least one person," but that the joy on their faces upon graduating was unforgettable.

"The effect on the prison has been profound," Kelley said. "The difference is the Gospel."

Kelley said some graduates at Angola have transferred to other prisons where they serve as "missionaries" sharing the Gospel and starting congregations. Once, an inmate at another NOBTS prison extension center asked for Kelley's help in transferring out of his medium security prison to Angola. Kelley explained that the man had taken every course NOBTS offered at his prison and wanted to go to Angola where more NOBTS courses were offered.

Each graduate matters, Kelley said, though they would not be the lead story on the evening news. Kelley urged them to remember that "no lives are too broken; no hatreds and hostilities too deep."

During commencement services held May 18, NOBTS' Leavell College granted 61 bachelor degrees, including the bachelor of arts degree in Christian Ministry to five at the Angola prison, and 13 to the Mississippi State Penitentiary, Parchman, Miss.

The Lockman Foundation presented each graduate with a copy of the New American Standard Bible.