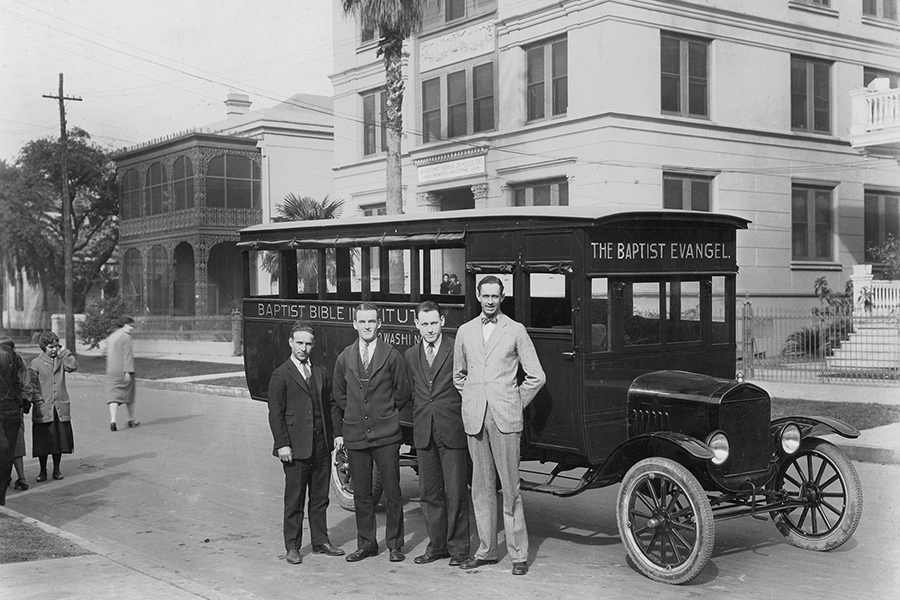 Answering God’s call requires absolute trust – an “all-in” faith that seems daring or even risky to the outside world. One hundred years ago, bold obedience resulted in the creation of New Orleans Baptist Theological Seminary.

Walking across the campus today, one could easily downplay the improbable nature of the school’s founding. It is easy to underestimate the boldness needed to plant roots in the nation’s most unique city or disregard the grit required to stay in New Orleans after Hurricane Katrina.

In May of 1917, messengers to the Southern Baptist Convention meeting in New Orleans voted to establish Baptist Bible Institute (BBI). The goal of the school was to help plant the Gospel in New Orleans and to utilize the urban environment as a Gospel-training laboratory.

Establishing a seminary in turn-of-the-century New Orleans was a God-sized, Great Commission endeavor. New Orleans bore little resemblance to the rest of the South. The diverse city had more in common with foreign mission fields than it did with other U.S. cities. Only six SBC churches existed in the city at the time.

Despite the unique challenges, Southern Baptists did not shy away from New Orleans. They put their money and support behind the new school and it thrived. 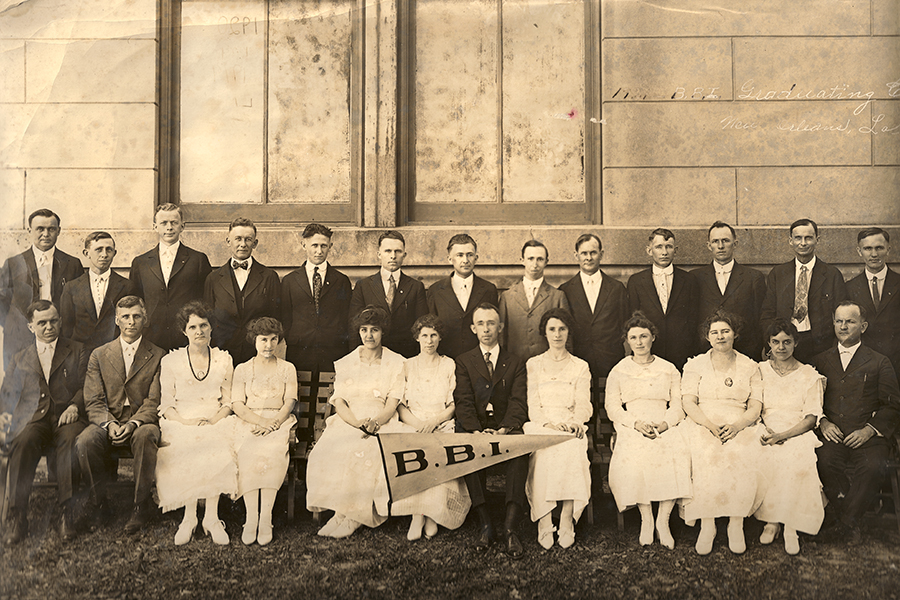 Within a year of the vote, Byron Hoover DeMent was named president, a faculty was assembled, a campus was purchased, and BBI was ready to open. Classes began in October 1918, but due to an influenza outbreak, the semester was suspended until mid-November.

Evangelizing New Orleans was a prime motivator behind the SBC decision to start BBI and the students and professors at the fledgling school embraced this task from the start. Busloads of BBI students shared the Gospel throughout the city and region in the early years. Evangelism in the city remains a high priority even today.

From the moment Hamilton took office in 1928, the school faced a fight for survival. Already in debt from the costs of starting the school, the Great Depression exacerbated the economic stress. During this dark time, BBI could only afford to pay five faculty members. Many who lost their jobs during the economic struggle, continued to teach without pay. Churches in the area often paid their BBI student-ministers with food. Each Sunday evening the student body met to divide the food they had received that day. They survived one week at a time.

During McCall’s brief presidency, the economy improved and the school paid off its debts. Trustees requested a name change from SBC messengers. On May 17, 1946, just days after Ronald Q. Leavell was elected as president, BBI was renamed as New Orleans Baptist Theological Seminary.

By the late 1940s, the original campus was crowded and offered no room for growth. Roland Q. Leavell secured a former pecan orchard in Gentilly and developed an ambitious campus plan. By 1953, the move to the new campus was complete. The academic profile advanced and the seminary received accreditation from the Association of Theological Schools during Leavell’s tenure.

The school continued to grow under the leadership of Leo Eddleman and Grady Cothen. Cothen was the first NOBTS graduate to assume the presidential role at his alma mater.

On Sept. 9, 1965, the new campus faced its first major weather challenge when Hurricane Betsy roared through the city. One-third of the campus flooded and many trees were lost, however, the damage was minimal and Eddleman’s team restored the campus.

In 1975, trustees selected Landrum Leavell II as the next president. Landrum was the second Leavell to lead the school, and only the second NOBTS graduate to serve as president. NOBTS became innovators in distance theological education by establishing a network of extension center. These centers allowed students serving in churches throughout the southeast to retain their church positions while completing a seminary education. Leavell expanded the main campus, purchasing a former department store and turning it into the Hardin Student Center. 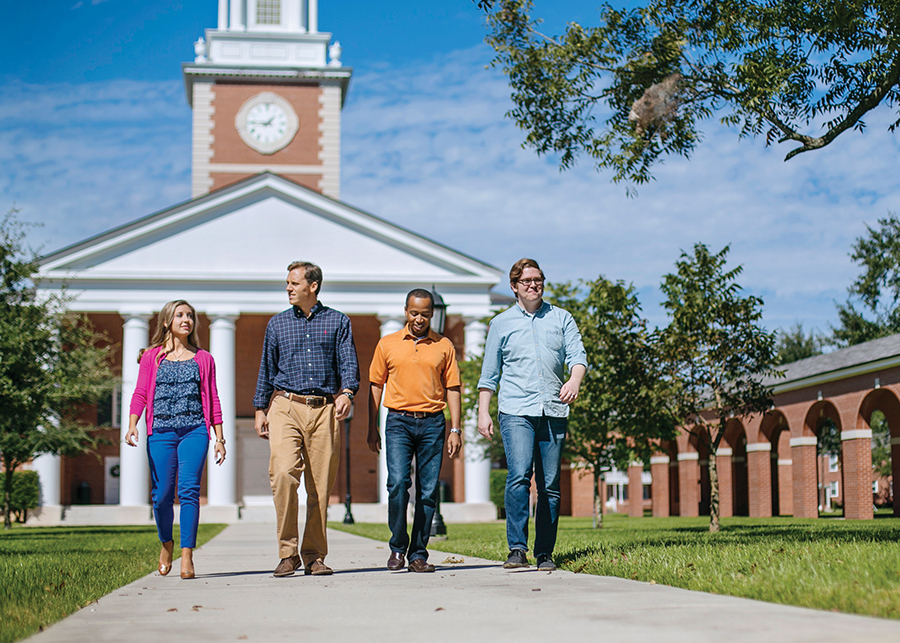 Shortly after Chuck Kelley was elected to follow Leavell as NOBTS president, serious termite damage was discovered throughout the campus. The trustees considered relocation, but in the end, approved a massive campus restoration effort. A few years after the campus rehabilitation effort, Hurricane Katrina ripped through the region and inundated the campus with flood water. Recovery was no small task, but the campus was rebuilt and the seminary community renewed its commitment to the city. Now, almost 13 years after the storm, NOBTS remains deeply engaged in ministry and evangelism in New Orleans.

The Kelley tenure has been marked by faithfulness to biblical doctrine, a commitment to high academic standards and a dedication to the practical aspects of ministry needed for church service. Intentional efforts to build a diverse student population have resulted in a growing African-American, Hispanic, and international student population. The school’s prison education program is making a kingdom impact in prisons throughout the southeast and the model is being used by other seminaries throughout the U.S. 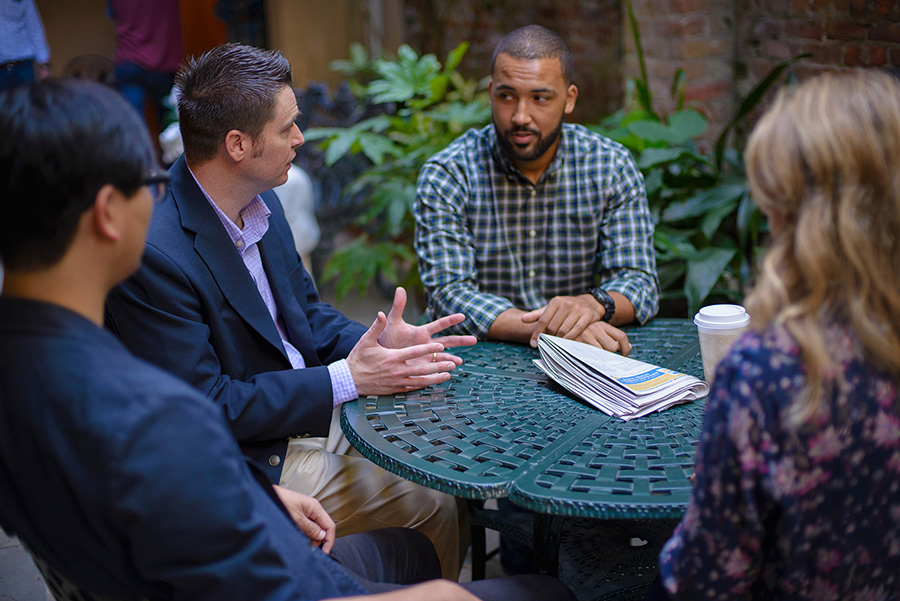 Today, the students, faculty and staff at NOBTS benefit from the bold commitment of SBC messengers 100 years ago. The current generation of students continues the seminary’s evangelistic and missional legacy in New Orleans and beyond.

President DeMent once remarked that the school was “pre-eminently the child of providence and prayer.” Dement’s remark seems like an appropriate way to describe the seminary's first 100 years.

Visit www.nobts.edu/100 for more on the centennial celebration.