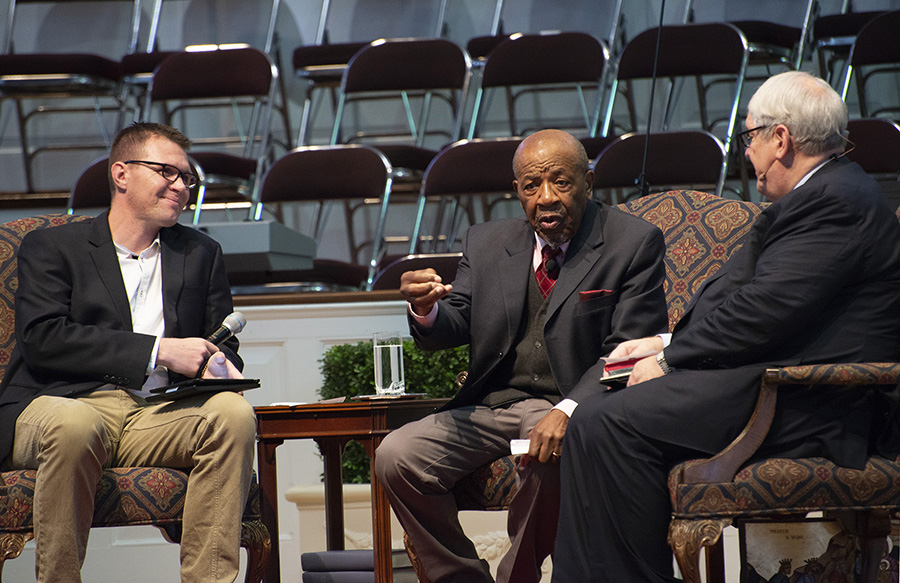 As Christians band together around the Gospel’s reconciliation between God and man, Perkins said racial reconciliation should come naturally, and he is hopeful that the current generation will make great strides in bringing it about.

Perkins, a Christian minister and leader in the racial reconciliation movement among evangelicals, directs the John M. Perkins Foundation for Reconciliation and Development in Jackson, Miss. In 1976, Perkins authored “Let Justice Roll Down,” a classic volume which charts his conversion to Christianity and how the power of the Gospel positions the church for racial reconciliation.

NOBTS President Chuck Kelley and NOBTS professor Page Brooks interacted with Perkins on a wide range of topics during chapel Oct. 25. Later that day Brooks led a question-and-answer session with Perkins on the changes needed for lasting reconciliation in the church. Perkins also met with members of the Reconcile organization, a group of students from different ethnic backgrounds seeking to encourage racial reconciliation efforts at the seminary and in local churches.

Perkins made it clear during his visit at NOBTS that the primary task of the church is to proclaim the Good News that Jesus came to forgive sins and save the lost. But, he noted, racial reconciliation is closely related to Gospel proclamation. A watching world looks at the church to see how Christians love one another.

Perkins warned against spending too much time diagnosing the problem but failing to find solutions. Throughout the day, he focused on positive steps for reconciliation, rather than critiquing failures.

“God forgives the past. He justifies the past,” Perkins said. “We have got to begin to begin. I’m saying this morning that we are beginning to begin.

“It is time for some of us to come together and take the initiative,” he said.

Perkins called attention to an African American family with four young children near the front of the chapel, saying he wanted to set a good example of racial reconciliation for those children and ultimately to a watching world.

“We have got to be exemplary,” Perkins said. He turned to Kelley and said, “You and I have got something to prove to them. They will know that we are Christians by our love, by our behavior.”

Asked to share his testimony, Perkins said he came to know Christ as Savior as an adult. He grew up in Mississippi during the Jim Crow era and said the Perkins family was known as “bootleggers and gamblers.” No one in his family was religious, much less Christian. But after his brother was killed in a racially motivated incident, Perkins moved to California, where he was introduced to the Gospel when someone invited his son to church.

“When he came home from church, I saw joy in him and he would sing this song, ‘Good News, Good News; Christ died for me,’” Perkins recounted. “Then he came home singing, ‘Jesus loves the little children, all the children of the world; red, brown, yellow, black, and white; they’re all precious in his sight.’”

Perkins had experienced something different in the Jim Crow South where churches typically barred black people. Because of this, Perkins always assumed that Jesus did not die for people like him. But the songs his son brought home ultimately led Perkins to church where he heard the Gospel and sought the love and forgiveness of God through Jesus.

“The rest of it was God -- saved by grace, through faith,” Perkins said.

Ten years after Perkins came to faith in Christ and had moved back to Mississippi, he endured an experience that could have left him bitter and broken. Jailed in 1970 for his civil rights protests in Mendenhall, Miss., Perkins endured beatings and torture by white law enforcement officials. He was tempted with despair and hate but prayed to God.

Hospitalized for the injuries, it was the love and care by white doctors that helped Perkins forgive those who beat him and keep his commitment to God.

“We need each other,” Perkins said. “Salvation is by the grace of God. It’s God’s initiative. And reconciliation is the very presence of Him. It’s not a side issue, it’s the mission. God is in Christ reconciling the world unto Himself and in us, so we can be a reconciling force.”

At age 88, Perkins said he plans to be part of the solution. According to NOBTS leaders and Perkins, the chapel and Q&A session were the first of what they hope to be an ongoing collaboration.