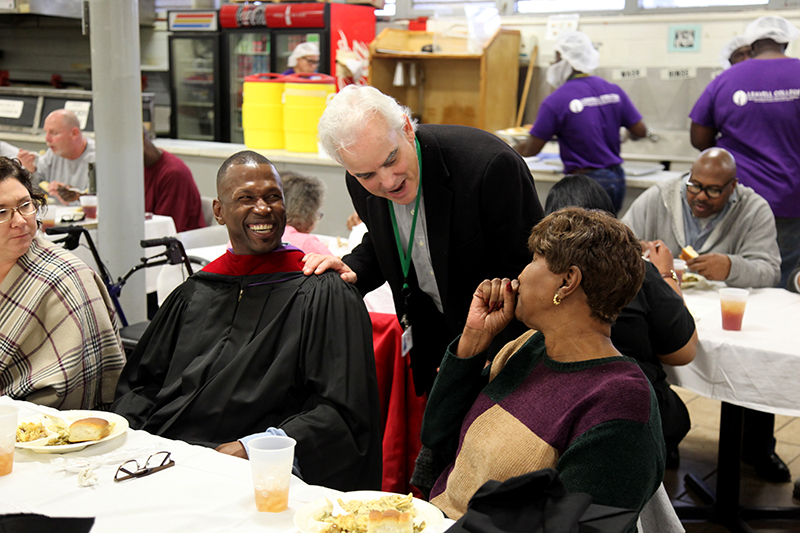 Prison Ministry Displays the Power of the Gospel
By Gary D. Myers

FIRST-PERSON -- The joy seemed so out of place in such a bleak setting – the Louisiana State Penitentiary in Angola, La. But that overwhelming joy on the faces of men who may spend the rest of their lives behind bars spoke volumes to me about the power of the Gospel.

Just a few days before Christmas, a group of faculty and staff members from New Orleans Baptist Theological Seminary and Leavell College made the trek to Angola to celebrate graduation inside the walls of our state’s maximum security prison. It was a cold, rainy day. The gray skies over the prison were punctuated by tall fences topped with razor wire -- not so subtle reminders about the purpose of this place.

Once inside, security was even more evident. Visitors had to pass through several layers of iron bars and a metal detector to get inside. I expected all of this. This is what we think of when we think about prison. And though I have been to Angola many times to cover events related to the seminary’s prison degree program, the joy of the Christian inmates always surprises me. The chapel, simple compared to most of our churches, was brimming with graduation candidates dressed in black robes and excited family members. For me, it was a glimpse at what heaven will be like.

Leavell College’s bachelor of arts in Christian ministry degree program at Angola, started in 1995, revolutionized this prison. Practical ministry training helped foster a change in a place once known as the “bloodiest prison in America.” Inmates who graduate from the program remain involved in ministry at the many churches they have started at the prison. Over time these graduates made a visible impact on the prison. Many have experienced salvation in Christ and Angola is a much safer place. NOBTS started additional ministry degree programs at the women’s prison in Louisiana and at men’s prisons in Florida, Georgia and Mississippi.

Despite their bleak surroundings and difficult circumstances (like constant role calls and isolation from society), these graduates find joy, peace and purpose in a relationship with Jesus. They express a deep sense of calling to share the redemption they have found in Christ with their fellow inmates, prison guards and anyone else who visits. This raw joy in salvation reminds me of an event in Jesus’ life recorded in Luke 7:36-50. I encourage you to read this passage with fresh eyes. It will bless you and convict you.

In the passage, Jesus was invited to eat at the house of a Pharisee named Simon. As Jesus reclined at the table, a woman “who had lived a sinful life” anointed His feet with perfume and her own tears. Simon noted to himself that Jesus could not be a prophet or He would know about the woman’s sinful past. Knowing Simon’s heart, Jesus addressed his attitude:

“A creditor had two debtors. One owed five hundred denarii, and the other fifty. Since they could not pay it back, he graciously forgave them both. So, which of them will love him more?” Simon answered, “I suppose the one he forgave more.” “You have judged correctly,” he told him. Turning to the woman, he said to Simon, “Do you see this woman? I entered your house; you gave me no water for my feet, but she, with her tears, has washed my feet and wiped them with her hair. You gave me no kiss, but she hasn’t stopped kissing my feet since I came in. You didn’t anoint my head with olive oil, but she has anointed my feet with perfume. Therefore I tell you, her many sins have been forgiven; that’s why she loved much. But the one who is forgiven little, loves little.” Then he said to her, “Your sins are forgiven.” – Luke 7:41-48 (CSB)

This convicts me every time I read it. At times I can be like Simon and think I somehow deserved salvation or that my sins were somehow smaller in comparison to the sins of others. It simply is not true. Though I came to Christ at a young age, I was no more or less deserving of salvation than the woman in Luke 7 or an Angola inmate. Sin is what separates us from God. Having sin forgiven in Christ and being reconciled with God is big. Anyone who comes to Christ has been forgiven much and we should love much.

These men recognize that Jesus has forgiven much and they cannot help but express their joy in His salvation. They blessed me. They convicted me. And they reminded me of how much Jesus had to forgive to save me.