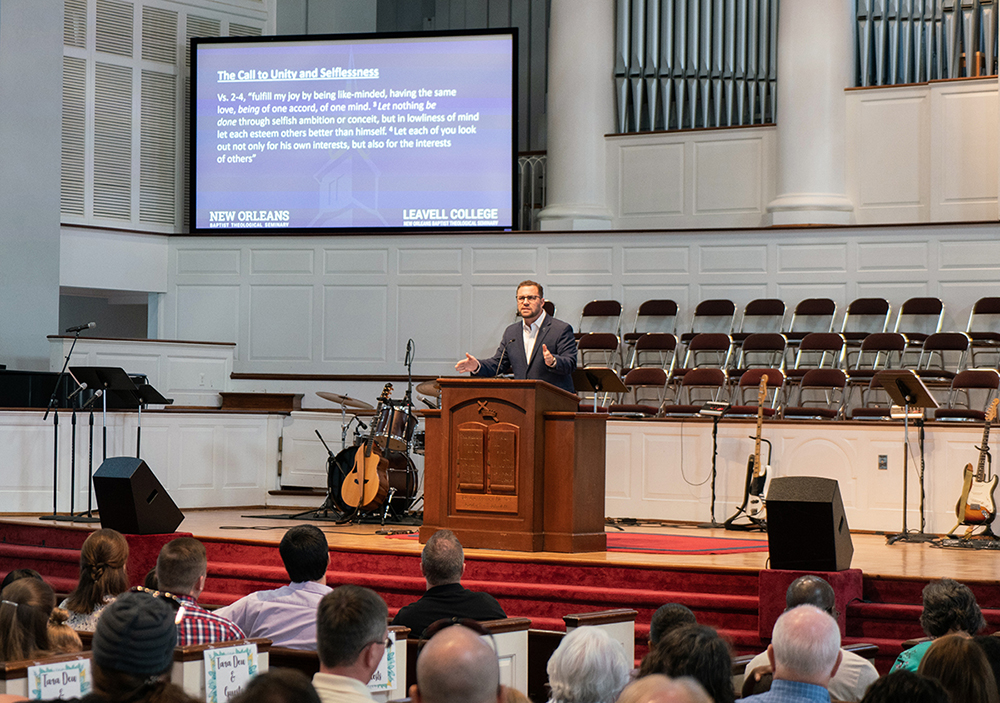 "Here the apostle Paul holds up Jesus Christ Himself to us and calls us to model our lives, everything about it, after the example He gives," Dew said. "The great command of this passage is, 'Let this mind be in you which was also in Christ Jesus.'"

Pointing to a peacock's manner of strutting in front of others, Dew cautioned that ego and sin can choke out God's Spirit in a believer's life.

"There's a little bit of peacock in each of us," Dew warned. "Kill the peacock."

Christ's followers are called to unity and selflessness, Dew said, adding that believers must stand out from a broken world divided along racial, political and cultural fronts.

"If ever there's a people on the earth that ought to be able to rise up out of that, it would be a people that has been redeemed from their brokenness ... that have tasted the sweetness of Christ ... that have been redeemed by the great mercies of Jesus Christ," Dew said.

Dew noted that two of Jesus' disciples -- Simon the Zealot and Matthew the tax collector -- came from viewpoints radically opposed to one another, explaining that Zealots resented fellow Jews who cooperated with Roman rule, particularly tax collectors. Yet, Scripture records no tension between the two disciples, Dew pointed out.

"Something happened to them when they came to know Jesus Christ as their Lord and Savior, and though they were different, they loved something else more," Dew explained.

The "peacock" has no place in Christian discipleship, Dew said, adding that believers must look out for others' interests more than their own.

Second, Christ is the believer's model for service and believers must remember the significance of Jesus washing the disciples' feet (John 13: 1-19), Dew noted.

While the Philippians 2 passage shows Christ's "emptying" of Himself by coming in human form, Dew said Paul intended to give believers "a frame of reference" for what service should look like.

"Washing the feet of others was the job of the lowest servant," Dew said. "And yet our Lord Jesus Himself, the one who brought it all into existence with a simple word ... took up a towel and basin and stooped and washed the filth from his disciples' feet. Let this mind be in you."

Taking up "the towel and the basin" -- a symbol Dew uses frequently to illustrate the seminary's vision and task -- means letting go of money, power, fame and recognition, Dew said, a calling he acknowledges may not be convenient or "fun."

Believers may wonder if serving others is worth the cost, Dew said. To answer, Dew said Paul calls believers to remember what Christ has done.

"Admittedly, obedience to Jesus has its moments where we have to let go of something that we really, really like. But, in letting go, we find out that what we thought would actually be bitter has become sweet and life-giving," Dew said.

Christ gives life and the reward for service is full and abundant life, Dew said.

Dew concluded with the challenge to the seminary community: "Kill the peacock. Be a servant."