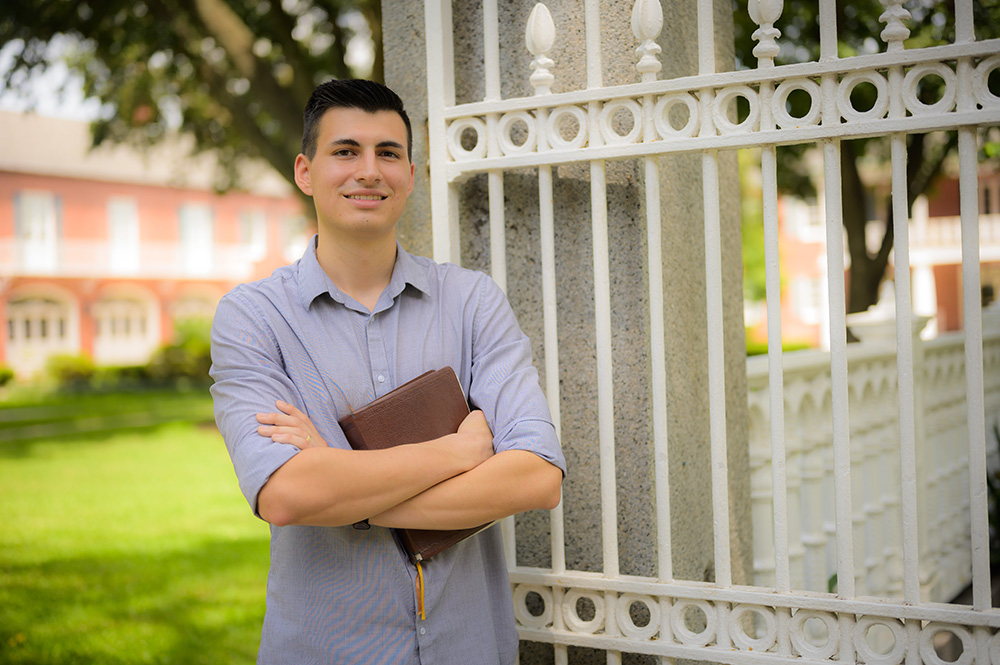 Dillon Diaz: Into the ocean of Living Water
By Marilyn Stewart

For a child who feels alone, the thought of living forever is terrifying.

Dillon Diaz was that child.

“My life, in some ways, was love-less,” said Diaz, a master's student at New Orleans Baptist Theological Seminary. “Some important relationships in my life were never really alive. I never had a real relationship with my dad.”

New Age spirituality, atheism, Eastern philosophies and divergent views from various Christian denominations -- all influences in his family -- swirled around Diaz as loud, confusing voices. As a teen, his beliefs were punctuated by “question marks” rather than periods at the ends of reasoned statements.

Diaz dusted off the “Apologetics Study Bible” that had sat virtually untouched on his shelf for years. Seeking answers, he opened to an article written by Dr. Robert Stewart, NOBTS professor of philosophy and theology, on Mary Baker Eddy and Christian Science, a counter-Christian system that had left its mark on Diaz’s family.

Today, as Diaz shares his faith with co-workers in New Orleans, he gives away copies of the apologetics Bible in hopes it will help them clear “the clutter” of conflicting ideas so the Gospel can shine through.

“Apologetics played a vital role in my coming to faith,” Diaz said. “It removed obstacles to faith.”

Diaz’s mother, a single mom, was devoted to Diaz and his half-brother, Johnny, yet struggled with questions of her own. When Diaz was confirmed at age twelve in the Lutheran Church, she gave him the “Apologetics Study Bible” – newly published at the time. Soon afterwards, the family’s attendance lagged.

As Diaz’s fear of eternity overwhelmed him, his mother gave answers as best as she could, but even this was shaped by universalism. She told him, “We’ll at least be together.”

Panic attacks seized Diaz at times as his relationship with his father felt “distant.” In many ways, his half-brother’s father --  a man unrelated to Diaz -- filled the gap. When Johnny spent weekends with his dad, John, Diaz was invited along.

Once, on the beach near their home on the Florida coast, the sunset’s striking beauty moved Diaz’s “stepfather” to remark that a greater “force” was at work in the world. As Diaz looks back, he sees it as a moment when God’s light broke through.

But life soon changed, and Diaz’s sense of being alone intensified as his biological father’s attention shifted to his children from another marriage. About the same time, John moved away.

Diaz’s loneliness turned to rebellion and soon broke the one relationship he had always depended on – his relationship with his mother.

“I felt completely alone,” Diaz said. “I felt like the only way to solve that problem was to end my life. It’s a miracle that I didn’t.”

For Diaz, it was a low point. A year or so later, God “entered the picture.”

FROM THE OCEAN TO LIVING WATER

The girl Diaz dated in high school brought him to a Baptist church, an important step in helping him leave behind an ungodly lifestyle.

Consumed with questions, Diaz went to his shelf and picked up the “Apologetics Study Bible” and began to read. He found that its more than one-hundred articles addressed many of his questions. As Diaz read and met with the pastor to talk through his questions, the turbulence inside gave way to calm. At age 17, Diaz came to faith in Christ.

Diaz was baptized in the same ocean where his step-father stood years earlier admiring the sunset. Later, Diaz learned that his first name has Welsh origins meaning “from the ocean.”

In a sense, water symbolizes much of Diaz’s life.

As a child, Diaz was wrongly taught that water baptism made one a Christian. As a teen, the crashing waves of cultural, counterfeit beliefs nearly pulled him under. The day he met Christ, a new life began, one nourished by the Living Water only Jesus can give.