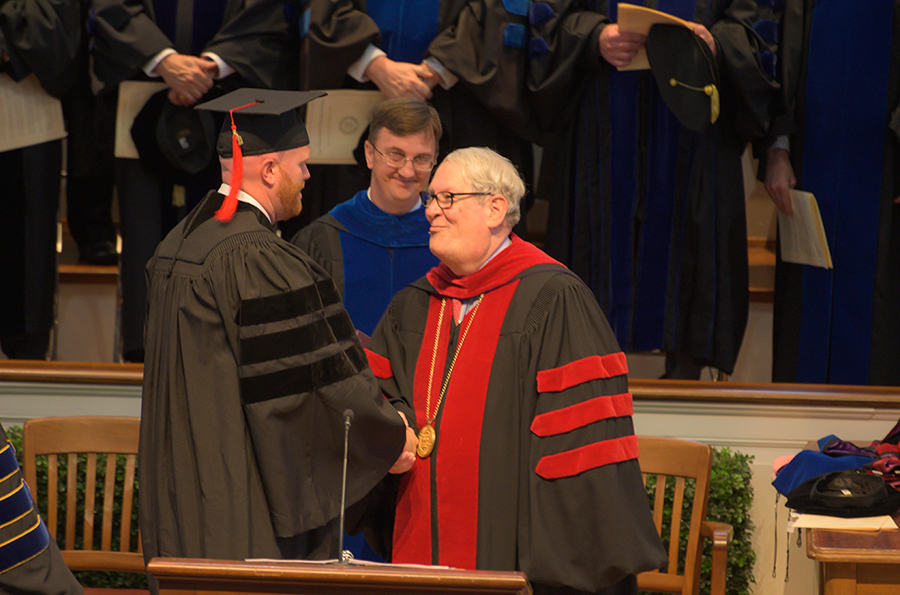 Kelley: ‘Do not be afraid; you are never alone’
By Marilyn Stewart

NEW ORLEANS -- Standing before graduate candidates in New Orleans Baptist Theological Seminary’s Leavell Chapel, May 18, in his final graduation address as president, Chuck Kelley challenged students to remember that God is able to accomplish the task each is called to do.

Kelley retires July 31, concluding his 23-year tenure as president. In his charge to the graduates, Kelley challenged them to remember that God’s plans for each in the future will hold surprises.

“Never be afraid of it. Never be intimidated by it. Never think that you’re not up to it,” Kelley continued. “It does not matter what you think of yourself. What matters is that the Lord God is able to accomplish whatever He wants to accomplish through you.”

Chuck and Rhonda Kelley were honored at the spring trustee-faculty dinner earlier this spring. Appreciation for the Kelleys’ service to NOBTS will be expressed at the alumni dinner at the SBC annual meeting in Birmingham, June 11.

Kelley’s graduation message was one of hope and encouragement as he told graduates that God uses those who simply are willing. Kelley reminded the chapel audience that noted evangelist D. L. Moody at the start of his ministry heard British preacher Henry Barley say that “the world has yet to see what could happen if one man fully devoted to God would do what God wanted him to do.” Moody determined that day to “be that one man,” Kelley said.

Yet brokenness will come, Kelley acknowledged, noting that in his 44 years at NOBTS – first as a student, then as a faculty member and then president – he has watched God work through brokenness.

Drawing from Isaiah 40:29-31, Kelley reminded graduates that the school’s 100-year history includes both hardship and perseverance because God remains faithful.

“We are NOBTS,” Kelley said. “We go to the hard places, we attempt the difficult things, not to be impressive, but for the glory of God and the work of His kingdom and the salvation of the lost.

“We are NOBTS,” Kelley continued. “When we hurt, we don’t give up. When we’re discouraged, we don’t quit. When it gets hard, we bear down, for we know we are in the grip of God.”

Before the conferral of degrees, Provost Norris Grubbs pointed to 1 Thessalonians 5:23-24 to remind candidates that “the one who calls you is faithful.”

“Knowledge is not enough,” Grubbs challenged the candidates. “You must always cultivate a growing relationship with the Lord so that you can remain faithful to the end.”

During commencement services held May 17, NOBTS’ Leavell College granted 80 bachelor degrees, including the Bachelor of Arts in Christian Ministry to ten at the Louisiana State Penitentiary at Angola, La., five at the Louisiana Correctional Institute for Women, five at the Mississippi State Penitentiary, Parchman, Miss., and twenty-one at Phillips State Prison, Buford, Ga.

The Lockman Foundation presented each graduate with a copy of the New American Standard Bible.

Marilyn Stewart is the assistant director of communications at NOBTS.