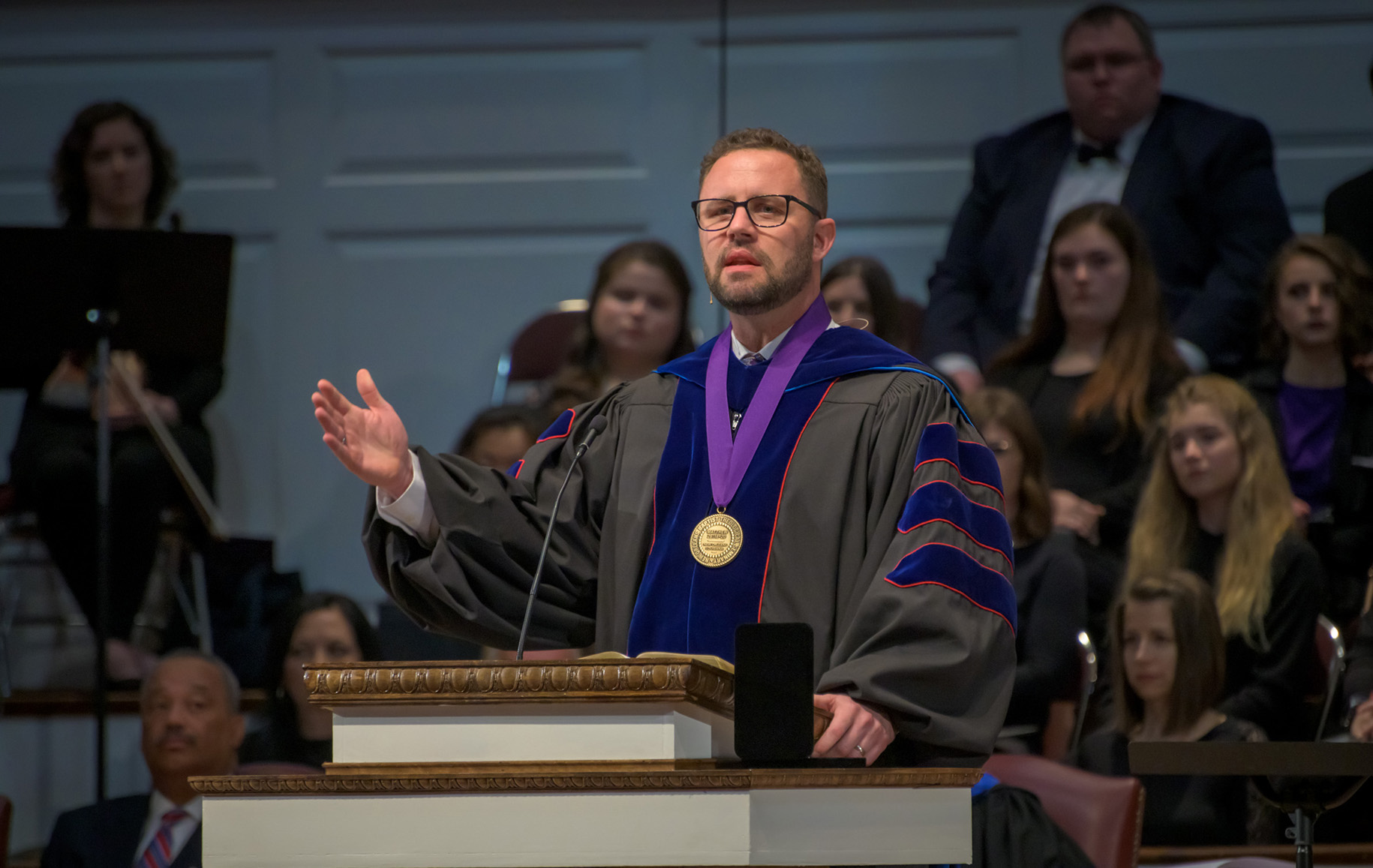 The inauguration of Jamie Dew, president of New Orleans Baptist Theological Seminary and Leavell College, reflected the tone that is the mark of Dew’s new presidency—humility and service like Jesus.

Since Dew’s election on June 5, 2019, his challenge to the seminary family, and all who would join him, is to take up the towel and the basin and follow Jesus’ example of serving others.

Dew opened his inaugural address by reading from 1 Corinthians 1:26-31 – a passage that describes how God uses the common and humble things of this world to accomplish His purposes. Glory, the passage says, is reserved for God and God alone.

“I am humbled, to say the least. I feel the weight of this moment unlike any other moment I’ve ever felt in my entire life. I am humbled by the trust that has been placed in me and the love you have expressed to my family and to me,” Dew said.

Despite the historic nature of the inauguration, Dew directed listeners’ focus to the mission rather than to himself. He called those gathered to ponder the brokenness of the world and their role in proclaiming the name of Jesus throughout the nations.

Dew thought of the thousands of hurting people in New Orleans -- the homeless living under bridges and overpasses, those who don’t know where they will get their next meal, and children whose families have been wrecked by drug abuse, and the billions of people around the world who have yet to hear the name of Jesus as the backdrop to the inaugural activities.

“I’m honored tonight. I’m humbled tonight. But set tonight and the honor you have bestowed on me against that backdrop,” Dew said.

Dew also pondered the day when his task as a seminary leader and his time on earth is complete.

“There is coming a day when this world will forget my name … a time to retire, a time to die, a time to stand before God and be judged,” Dew said. “It will simply matter on that day that we be faithful.”

Dew closed his inaugural address with an exposition of the seminary’s new mission statement. The statement reads: “New Orleans Baptist Theological Seminary and Leavell College prepare servants to walk with Christ, proclaim His truth, and fulfill His mission.”

Dew explained that the mission statement calls the seminary family to servanthood, to spiritual fervor and deep devotion to Christ through Gospel proclamation among the lost and broken, service and discipleship.

“Tonight, I turn us as an institution, as a family, and anybody else who wants to get onboard to this simple, simple mission,” he said. “Everything we do, every class we teach, every program we offer, every dollar we spend, every initiative that we unfold will be to execute that mission.”

A PASSION FOR THE LOST

Drawing from the well-known passage of Matthew 28:19-20, Danny Akin, Southeastern Baptist Theological Seminary president and close friend of the Dews, offered words of encouragement in his charge to Dew.

“Rest in the power and authority of King Jesus,” Akin said. You will find Him sufficient every step of the way.”

The imperative found in the verses provided the backdrop for Akin’s second word of encouragement.

“Be obedient to His commission,” Akin said. “We are called to make disciples, but we can’t make disciples if we don’t win lost people to Jesus.”

NOBTS is known for its commitment to evangelism, Akin explained, and praised Dew’s predecessor—Chuck Kelley—for his passion in calling believers to have “a hot heart for souls.”

“It is my prayer that you will continue to stoke that fire and that this school will burn brighter and hotter for the souls of lost men and women,” Akin said.

A CHARGE TO THE DEW FAMILY

Tara Dew and children Natalie and Nathan, 12, and Samantha and Samuel, 9, read from Mark 10:35-45, the passage engraved on the back of the presidential medallion worn by Dew at formal academic seminary events.

One of the more moving moments of the night came during the short charge R. Albert Mohler Jr., president of The Southern Baptist Theological Seminary, gave to Tara Dew and the Dew children. Knowing well the spiritual and emotional weight of Dew’s task, Mohler affirmed the vital role each family member will play in supporting, encouraging and praying for Dew. He urged the Dew children to have fun and simply be all that God has called each of them to be.

Gary Shows, board of trustees chairman and member of the selection committee, explained before placing the medallion on Dew’s shoulders that the medallion represents the authority of the presidential office but also the trust of “the board of trustees, students, faculty, staff, alumni, and 46,000 Southern Baptist churches.”

Upon his inauguration as NOBTS president, Chuck Kelley was given the pocket watch that belonged to Byron Hoover DeMent, the first president of the school. Throughout his presidency, Kelley kept the watch on his desk as a reminder that his time in the role would be limited and that he needed to make the most of each day. During the inauguration, Kelley gifted the watch to Dew and encouraged him to make the most of his time as president.

In attendance were dignitaries from 28 academic institutions, the presidents of all the SBC seminaries, several state convention directors and leaders, trustees, pastors, church members, and local guests.

Steve Horn, Louisiana Baptist Convention executive director, brought greetings from and expressed the commitment of Louisiana Baptists to continue to partner with NOBTS in service, noting that a healthy seminary “translates well into the health and strength of our churches.”

“Indeed, we are in this endeavor together,” Horn said. “Dr. Dew, we have heard your call to service and humility and we welcome the challenge to pick up the towel and the basin alongside you.”

J. D. Greear, SBC president, expressed his congratulations via pre-recorded video, saying, “God has given you a very capable leader in a very critical hour. I believe, I truly believe, that New Orleans Seminary’s greatest days are ahead.”

Ronnie Floyd, executive committee president and CEO, spoke in chapel earlier in the day, and brought his greetings from the Convention in the evening inaugural event.