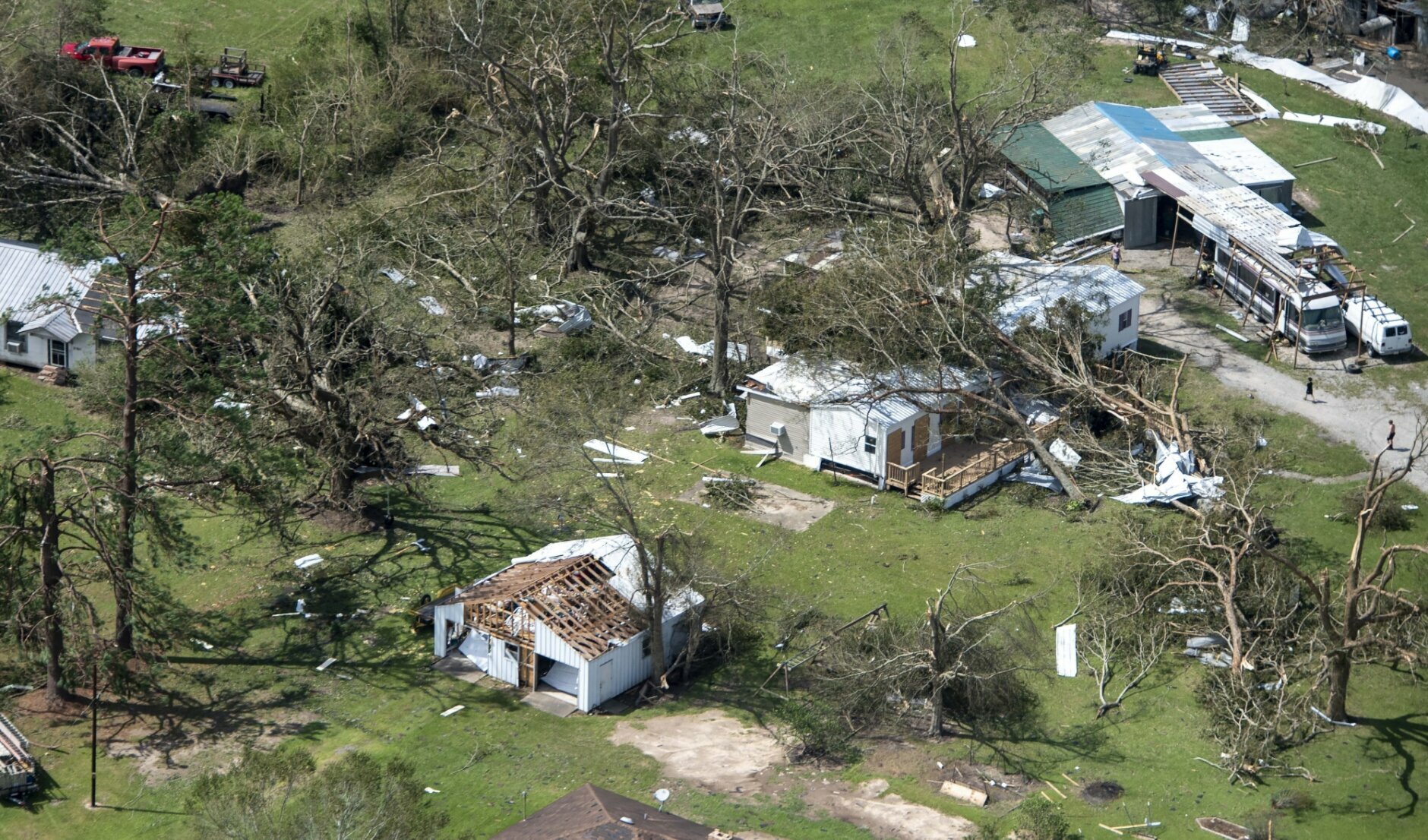 After Hurricane Laura tore through Lake Charles, La. on Aug. 27 – making landfall as a category 4 storm – Chad Gilbert (MDIV ‘07) and wife Cole knew God had prepared them for that moment.

Chad, associate pastor of community and missions at Trinity Baptist Church in Lake Charles,  works alongside the Southern Baptist Disaster Relief feeding unit and other groups to help coordinate and direct volunteers, distribute relief supplies and provide comfort and counseling to those in need.

“I can’t count how many people I’ve spoken to through their car windows as they drive up for a meal or assistance that have told me they were living in their car, that their home was destroyed and nothing was left,” Chad said.

At the church campus, the SBC feeding unit prepares 20,000 meals per day, with upwards of 6,000 meals served on-site daily.

With sustained winds of 130 miles per hour, the devastation is widespread as tornado-like winds inside the storm destroyed homes and snapped metal electrical poles in half, Chad explained.

For the couple, the loss feels familiar.

The couple felt the impact of Hurricane Katrina’s flooding at their campus apartment in 2005. Two years later, a tornado delivered a one-two punch to seminary’s neighbors, where many still struggled to rebuild.

Chad felt the loss for his neighbors deeply, but soon felt God prompting him to simply “get up and go to where the people are.”

For Chad, the moment was life-changing. He drove to the neighborhood and began knocking on doors.

“That was a real turning point for me in realizing that that’s the most meaningful thing that, as believers, we can do in these moments,” Chad said. “Just that hand on the shoulder, that word of prayer, or listening for ten minutes on someone’s porch as they talk about their experience.”

As Chad once again ministers to those facing catastrophic loss, Cole watches him put into practice the lesson that has become an earmark of his ministry.

“Chad would go up to each car in line and just talk to people, and listen,” Cole said. “They would share their experience and he would be able to share the Gospel or let them know that God sees them and loves them.”

Friendships the couple forged at the seminary and through Chad’s time as a New Orleans pastor and Cole’s ministry to women, became an immediate lifeline of help to the hurting Lake Charles community.

“It’s been neat seeing how God graced me with those relationships so that now in this moment, help could be available to this region. I was an easy first phone call to reach out and say, ‘How can we help?’” Chad said. “That’s been huge.”

The Southern Baptist Disaster Relief unit housed at Trinity Baptist Church includes more than 150 volunteers. Housed on the other side of the church campus is the Louisiana Sheriff’s Association, a cooperative unit from parishes across the state deploying more than 300 deputy sheriffs and workers.

“It’s hard to see people who come up to you and say, ‘I’ve lost everything. I need everything.’ The need is so overwhelming,” Cole explained, but then added, “But so is the response.”

AN UNDERSTANDING THAT TRANSFORMS

When talking to those who are in need, Chad employs a practice he learned from friends who had attended a marriage enrichment retreat. Chad tries to put himself in the other person’s situation.

“Too often, we say things that minimalize what the other person is feeling, such as when a bedroom in the house is destroyed and we say, ‘But at least you didn’t lose your whole house,’” Chad explained. Chad has learned to say instead, “I imagine that feels overwhelming to have to put that back together.”

When people are hurting, knowing that someone else understands can be transformative, Chad explained.

“It is unbelievable to watch how it comforts people as you try to wrap your mind around what it must be like to be in their position,” Chad said. “They often respond, ‘Yes. Yes, that is exactly how I feel.’”

One family facing damage at their house seemed paralyzed and unable to take the first step toward cleanup.

“Chad told them, ‘Just mourn,’” Cole recounted. “Then you will know what to do and how to begin.”

The advice proved helpful, and soon the family was able to move forward, even opening their yard to others as a place to find supplies or food.

KIDS HAVE FEELINGS TOO

For Cole, her broad ministry to women includes her online presence in social media. Her posts offering comfort and tips to parents during this time have garnered many responses.

Cole noted that life was beginning to feel “more normal” for the couple’s four children as COVID-19 restrictions began to ease. Then came Hurricane Laura.

“Their worlds have been turned upside down, too,” Cole explained. “I have moments where I just need to cry. I have coping mechanisms, but the kids have those same feelings, and they need to be given those coping mechanisms.”

Providing children a way to serve is essential for helping them cope, Cole explained. She said their oldest daughter, Ava, age 12, helped distribute water bottles at the drive-up line at church. Cole made sure to give her time and space to discuss everything she saw.

“Ava said it was so overwhelming and hard to see,” Cole said, then added what her daughter said next. “But, I handed out bottles of water, and it felt very good.’”