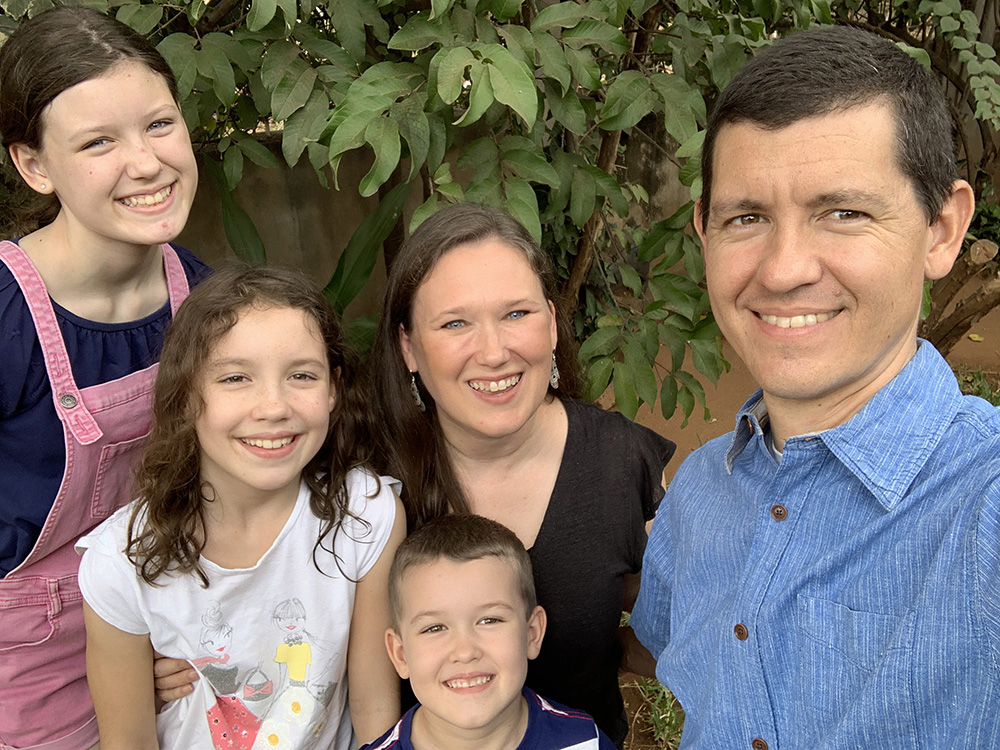 God's call steadies and encourages Chris and Katie Nalls as they serve in a 'Dry and Weary Land'
By Gary D. Myers

American Christians tend to idealize mission service. We are grateful for the men and women who answer God’s call to live in another culture and share the Gospel in remote and difficult places. We honor the sacrifices missionaries make for this Gospel witness but often fail to take a wide-eyed look at the difficulties they face and internalize their challenges. We don’t see the sweat or the tears.

Chris and Katie Nalls serve in a difficult place — Tete, Mozambique. During a recent video interview, Chris and Katie called the country a “dry and weary land – physically and spiritually.”

Currently experiencing summer, temperatures often surpass 100 degrees. Due to the hot, muggy conditions cooling their home is difficult. Even during the other seasons of the year, Mozambique is uncomfortably hot. But the weather conditions are the least of the problems the Nalls encounter — their biggest challenge comes from animism practiced by so many in the country. While the weather keeps the family uncomfortable, they grieve over the lostness in Mozambique.

Chris and Katie arrived in Tete 12 and a half years ago with a burden for the lost and a desire to help believers grow. Their oldest daughter, Abigail, was less than a year old when they arrived. She celebrates her 13th birthday in December. The Nalls now have three children— Emma Claire (10) and Daniel (6) were born in Africa after the Nalls arrived.

While the city was new to them, the country was not. Chris and Katie both served in other parts of Mozambique through the Journeyman program with the International Mission Board (IMB). During their time in Mozambique as Journeymen, they joined the IMB team in praying that God would raise up missionaries to serve in Tete. They never dreamed that God would call them to Tete.

“All we knew about Tete was that it was the hottest place in Mozambique,” Katie said. “We prayed never thinking that would still be a need by the time we finished seminary.”

During their years at NOBTS, they prayed about serving other places, but God consistently guided them to Tete. Their exposure to African and Mozambican culture and their working knowledge of the Portuguese language gave them a head start when they arrived. However, there were still moments of cultural shock along with the ongoing challenges with the climate.

The IMB tasked Chris with planting churches among the Nyungwe people (an unreached people group) and leadership development in existing churches. Chris’s work often took him to remote areas to assist with church planting efforts or leadership training activities before COVID-19 hampered these efforts. The global pandemic has altered life for Chris, Katie, and their three children.

Despite the virus, God is at work. With the help of Send Relief, Chris was able to train churches to build and implement “tippy-tap” handwashing stations to help limit the spread of the virus. Chris utilized the foot-operated, gravity-driven handwashing stations to reduce Cholera in a temporary housing area after a flood in 2019. He knew that the touch-free handwashing stations would help with COVID as well. The initiative also provided Chris with the opportunity to invest time with church leaders in the region despite the pandemic restrictions.

Another big Send Relief project in the area is nearing completion — a unique well system called an infiltration gallery. The concept utilizes a seasonal river bed, which is usually dry, to harvest water below the sand. It has been a massive undertaking, but with help from volunteers from the U.S. and local workers the project is almost ready. The last step will be to fit the well with a manual hand pump.

The project will meet a practical need by providing a reliable source of clean water where potable water is scarce. However, the well project has already resulted in some finding the “living water” only Jesus can provide. The project has offered Chris many opportunities to share the Gospel.

“This is a hard area spiritually speaking, and it is a harsh environment,” Chris said. “As we worked on the project, we continued to share the Gospel with the local workers and three of those professed faith in Christ. But there are just so many people here who remain in spiritual darkness.”

Chris said that he is praying the well would bring glory to God and open doors for additional evangelism efforts. The Nalls are also praying that Mozambican Christians will develop a heart for the nations coming to live in their midst. The coal mining industry is bringing thousands of foreign workers to the city. In the past decade, the population of Tete has nearly doubled. The Nalls are also praying that the existing church in Mozambique will develop a vision for cross-cultural evangelism among these immigrants and temporary residents.

Their ministry in Mozambique is not easy. Chris and Katie cling to God’s calling on their lives when troubles come, and discouragement is near. They recall how clear God’s call was as they prayed through possible assignments as NOBTS students. God’s call to Tete remains strong, and their burden for the people has only grown through the years.